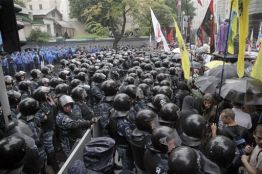 There was confrontation on Tuesday in the centre of Kyiv with thousands of protesters and huge numbers of Berkut riot police. The UNIAN news agency reported that tear gas appeared to have been used both by riot police and by protesters.

This followed the vote in parliament on a highly contentious bill “On the principles of language policy”.  The bill has been condemned by many public figures, as well as opposition politicians and NGOs, as being the first step to making Russian the second official language.  The Party of the Regions and Yanukovych have consistently made such promises during election campaigns.  They do not, however, have the required 300 constitutional majority to make changes to the present Constitution.  The bill was passed this time by 234 votes with the ruling majority obviously all voting for it (many in their absence, their cards being used by others).

Following the failure just over a week ago to put the bill to the vote and violent clashes in parliament between the ruling majority and opposition MPs, on Tuesday Party of the Regions MPs formed a cordon around the Speaker, Volodymyr Lytvyn to allow him to put the bill to a vote.

As reported, there had been calls from the First of December Initiative Group, the All-Ukrainian Council of Churches and Religious Organizations and others to withdraw the bill seen by many as an attempt by the Party of the Regions to distract attention