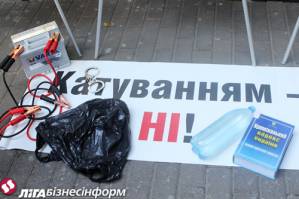 Photo from a protest against police torture

A cordial invitation to the opening at 10.00 Friday, 8 June 2012 of the “Human Rights Offside” Exhibition, timed to coincide with the Euro 2012 Championship. The exhibition has been organized by the Centre for Civil Liberties in partnership with the Czech NGO People in Need.

The exhibition will provide insight about the following:

Why people are tortured by the police

Who has an interest on encroachments of freedom of speech

What the judiciary is turning into

Social inequality in Ukraine – how can people survive?

The exhibition will be opened by writer, philosopher and former political prisoner Yevhen Sverstyuk, writer Irena Karpa, the Ambassador of the Czech Republic Ivan Počuch, and representatives of the International Minority Rights Group, the Moscow Helsinki Group and others.

It will also be attended by people who have direct experience of human rights abuses in Ukraine, including Rostyslav Shaposhnykov, Head of the Dorozhny Kontrol website which monitors the work of the traffic police; the mother of a young man tortured by the police; a youth activist whom the police tried to abduct during a protest action.

The general partner of the exhibition in Kyiv is the Scientific and Cultural Centre ATMASFERA 360.

Information support is being provided by the Centre for Human Rights Information, while information partners are Ukrainski Novyny and Portal tochka.net.

As well as 90 minutes for a football match, find a few minutes to look at our nine stands which show the most important human rights infringements in Ukraine over the last two years.