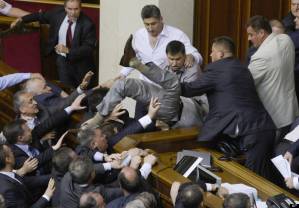 Violence in parliament over the language bill on 24 May

Members of national minorities in Ukraine have criticized the draft law on language policy passed in its first reading last week.  They warn that the law is aimed at supporting one language alone – Russian.

One of the two authors of the bill Vadim Kolesnichenko (Party of the Regions) is prone to making grandiose statements such as that in his blog on Ukrainska Pravda: “The spheres of use of regional languages and languages of minorities have been effectively destroyed and this is one of the main reasons for the spread of intolerance and xenophobia in Ukraine. He claims that the bill is aimed at protecting these rights.

There is, however, a nuance which is that representatives of national minorities whose languages are supposedly being protected are not at all enamoured by the bill.

The Congress of National Communities of Ukraine, for example, says that the bill is aimed at protecting one language along  - Russian. Tetyana Khorunzha, Editor of the Congress’ newspaper “Forum of Nations” says that nobody is planning to protect the languages of Bulgarians, Gagauz, Jews, Greeks, and that the law is about putting Russian on the level of a state language/

According to Viacheslav Kirylenko from one of the opposition parties in parliament, 5 billion UAH would be needed for the law to fully function.

Fedora Arnaut of the Union of Gagauzes of Ukraine is deeply sceptical when considerably smaller amounts needed have not been forthcoming.  The Education Ministry at one stage offered to pay for a thousand textbooks in Gagauz language, but the money was never provided.

Tetyana Khorunzha from the Congress of National Communities points out that no money has been set aside for if the bill is passed. “They have no intention of concerning themselves with the languages of national minorities, they plan to deal only with Russian. For that they don’t need any money. And later they’ll make it a second language”.

The Association of Jewish Organizations and Communities of Ukraine is also critical of the language draft bill. The Head of the Association, Josif Zisels does not see the bill as resolving the language problems of national minorities, and is only about trying to improve the rating of the Party of the Regions and other pro-government parties.  He says that Hebrew is not under pressure in the present legislation since the Jewish communities make all effort to support the language. He adds that national minorities should have the energy to defend their own language, and does not believe this is a matter for the state.

He does however acknowledge that the present law is out of date, but says that changes should be to defend the rights of minorities who do not have their own state, not Russian. These are the Crimean Tatar, Roma, Gagauz and Karaim languages.