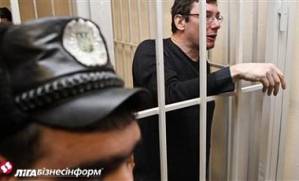 The trial continued on 13 June of former Interior Minister Yury Lutsenko on the third change against him which was unexpectedly separated into a different trial late last year.

Yury Lutsenko told the Pechersky District Court in Kyiv that he denied any guilt over the charges.  He is accused of having organized the unlawful surveillance on Valentin Davydenko, driver of the former Deputy Head of the SBU [Security Service] Volodymyr Satsyuk. Yushchenko had been taken ill in 2004 after dining with SBU people at the dacha of the SBU Deputy Head.

Lutsenko asserted that the Prosecutor General’s Officer was trying, though the charges of unlawful surveillance, to destroy the case over Yushchenko’s poisoning, “since Davydenko may be one of the key witnesses regarding the person who took the dioxin there”.

The Prosecutor General Viktor Pshonka recently stated that they have grounds for terminating the poisoning case, but that they will wait until Yushchenko gives blood or until the end of the year if the former President fails to do so.

Davydenko was again not present in the court.  Yury Lutsenko’s lawyers said that the hearing could therefore not continue, however the judge quoted an old telegram where Davydenko asked for the hearings to continue in his absence.  Despite Lutsenko’s objections, the court is planning to simply read out Davydenko’s testimony.

As reported, , one of the reasons for separating out the surveillance charge was linked with problems over witnesses’ appearance. Yet on 18 May Judge Medushevska suggested that  the trial could continue without the alleged victim, i.e.  Davydenko, Following categorical protest from Yury Lutsenko and his lawyers, the Judge agreed to have Davydenko forcibly brought to the court, yet on 1 June the court hearing took place without Davydenko, the judge saying that he had sent a telegram saying his state of health precluded him from attending, but saying that he confirmed his testimony.

This was despite the fact that during the original trial witness after witness asserted in court that their testimony had been distorted, that they had been put under pressure or, simply, that the behaviour with which Lutsenko was charged, had been and remained standard practice within the Ministry.  All of this was ignored.

The sole witness questioned on Wednesday was Yevhen Troyan. He stated that he did considered continuation of the surveillance of Davydenko to have been lawful.

“I consider that the decision to continue the investigative operations, signed by Yury Lutsenko, was legally since later evidence came to light that this person might really be implicated in the crime.”

Following this Judge Medushevska adjourned the trial under 22 June.