Master-class in Distortion from the Police 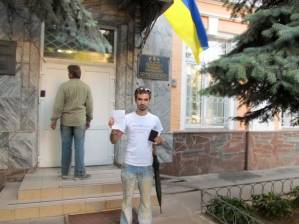 Marina Hovorukhina from the Centre for Civil Liberties writes about the lessons in discrediting the victims provided by the Interior Ministry’s Public Liaison Department in their efforts to sway public opinion where the police have acted against the law.

“Who do most people have a negative attitude towards?  That’s right – to alcoholics, drug addicts, down-and-outs, “inadequate” people, etc. So in order to form the “correct” perception, you should present a person in the media in such an unprepossessing light.

A wonderful example was provided on the day of the Euro 2012 Final by the Public Liaison Department with human rights activist Nazar Boyarsky presented as some kind of “mad guy from the Vinnytsa region”.

I witnessed the events which the police “reported” and can testify to the manipulative strategy used. The police report states that on 1 July “a 34-year-old man from the Vinnytsa region who calls himself an employee of the Centre for Civil Liberties carried out an action which he calls an exposition of a travelling photo exhibition”.

What was supposed to take place on Rustaveli St was a protest organized by the Centre for Civil Liberties. Nazar was one of the coordinators and is indeed an employee of the Centre, albeit 24 not 34 and a Kyiv resident.

Nor did he “carry out his action” alone but with other human rights activists, including members of the Ukrainian Helsinki Human Rights Union; the Foundation for Regional Initiatives; the Association of Ukrainian Human Rights Monitors on Law Enforcement; the No Borders Project and others. The local authorities had been informed of the planned action in advance.

In fact, it is clearly visible on the photo that the exhibition was made up of a number of stands which depicted human rights violations in Ukraine. One did indeed show an “imprisoned foreign national”, this being the imprisoned Belarusian human rights defender Ales Bialiatski

The police report also states that according to the notification, the exhibition was supposed to take place in Kyiv in another location from 8-10 June. The author points out that this was precisely what did happen, with the exhibition then travelling to the cities hosting Euro 2012.  Its closure, together with a petition in support of Ales Bialiatski, was planned for 1 July in Kyiv.

It is extraordinary that the police should resort to publishing such false information considering that the participants in the action photographed and videoed everything taking place.

If one is to assume that Nazar really did organize the protest and stood there alone with a placard in his hands, then why did 20 armed police officers come to detain him?

And how after that can one belief the reports of the police press service where if a person has died in a police station, he’s invariably an alcoholic, drug addict or mad, and himself fell, and caused his own death. These cases, unfortunately, nobody is able to record on video.

After a person died in a Poltava region police station, the report stated that “according to police information the deceased was a long-time alcoholic”.

In the Kirovohrad region about a death in a police station, “Doctors found alcoholic inebriation”.

With regard to the death of Ihor Indylo: The Kyiv Police have named the cause of death of Indylo who in May 2010 was brought in the night to the Shevchenkivsk District Police Station and was the next morning found death in his cell as a closed brain and skull injury which he apparently received falling from his bunk due to extreme alcoholic intoxication.”

Death in a police station in Kyiv: “The death was as a result of a drug overdose”.

In Enerhodar: “48 year-old Andriy had just been sentenced to three years for selling drugs”.

In Kharkiv: “Doctors reported a heart attack, but do not exclude the possibility that the death was due to an overdose”.

He fell himself and died.

In the Kirovohrad region a detainee died in the police station: “Moreover there are grounds for believing that the bodily injuries, including the fractured ribs on the left and bruise on that side may have been received in falling from the right of the building’s drainpipes”

Death in a Donetsk police station: “After completion of the investigative activities he left the office, sat on a chair in the corridor and lost consciousness. Police officers immediately called an ambulance which after examining him certified his death”.

Death in Sumy: “A man began giving testimony however was obviously nervous and behaved in an inadequate manner. He threatened to injure himself or those around, and tried to escape from the office”.

The above are just some examples from the diverse picture of what happens in law enforcement bodies. The wish at all costs to whitewash the police and inability to admit to their own mistakes are doing them an ill service with less and less Ukrainians trusting them. It’s enough to just read the comments on the Internet to see what people think of the law enforcement bodies.

Is it not time for the police press service to quit feeding people with lies?

Slightly adapted from the original by Marina Hovoruhkina