So how much would the new language law cost?Playing with AmbiguitiesAssessment of the Draft Bill on Principles of State Language PolicyStatus of the Russian language takes 31st place in Ukrainians’ prioritiesNot all national minorities want controversial language law’s “protection”Riot police, tear gas and confrontations as language bill passed at first stageLatest use or abuse of the “language issue”Call to reject draft bill on language policyCongress of National Communities speaks out over recent criticism of OSCE officialConfrontation, teargas and political impasse over language billKyiv erupts over language billReligious leaders urge President not to sign divisive language billFirst December Initiative condemns “language” coup in parliamentLanguage and constitutional reform: dangerous trendsUABA: Statement regarding the Principles of Language Policy ActThe Kivalov-Kolesnichenko Language Bill must not be signed into law!Cherkasy: Riot police roughly disperse „language law” protestPolice buy up special means. For the elections?Cherkasy court bans political protest for nearly 2 monthsLanguage law prompts most protests in three years
• Topics / Politics and human rights 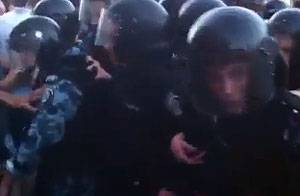 n Tuesday afternoon, with the media abuzz over the European Court of Human Rights judgement that Yury Lutsenko’s rights had been violated, the ruling majority whipped through its contentious language bill. The Law on the Principles of State Language Policy (No. 9073) has been condemned by religious and civic groups, analysts and others, as aimed at overriding the constitutional norm which states that Ukrainian is the only official State language.

The bill received 248 votes after suddenly being put to the vote by Deputy Speaker from the communists, Adam Martynyuk.

Following the vote, Lilya Hryhorovych from Our Ukraine – People’s Self-Defence said that the vote was taken in violation of the parliamentary regulations since they had used strongman tactics to vote through the bill in the version passed in its first reading.

The voting took place in the first minutes of the plenary session. Ukrainska Pravda reports that the “MPs from the Party of the Regions who usually take part in confrontation through force having taken position in the government’s box.”

Later they prevented MPs from the opposition from disrupting the vote.

Speaker Volodymyr Lytvyn was absent from the session. The Prime Minister Mykola Azarov arrived just before it began.

Throughout the evening there was protest with Berkut riot police out in force.  Tear gas would seem to have been used, but it is unclear by whom.

While ethnic Russians are a minority in Ukraine, claims that the Russian language is a “minority” language have not convinced such bodies as the Council of Europe’s Venice Commission and OSCE and elicit profound scepticism from many Ukrainians.  Russian is widely used everywhere, with Ukrainian much less common in the South and East of the country.  Even in the predominantly Ukrainian-speaking West of the country it is still harder to find books in Ukrainian than in Russian.  The draft law which would entail amendments to some 33 other laws would make Russian a de facto second official language in areas with a large “minority” of Russian speakers.  Since there are areas where it is already hard to function in day-to-day life in Ukrainian (the Donetsk and Luhansk regions, the Crimea, for example), if the bill is passed, using Ukrainian is likely to become even harder.

Over recent months there have been a number of calls to reject this bill and stop dividing the country.  Tetyana Khorunzha from the Congress of National Communities points out that no money has been set aside for if the bill is passed. “They have no intention of concerning themselves with the languages of national minorities, they plan to deal only with Russian. For that they don’t need any money. And later they’ll make it a second language”.

The Association of Jewish Organizations and Communities of Ukraine is also critical of the language draft bill. The Head of the Association, Josif Zisels does not see the bill as resolving the language problems of national minorities, and is only about trying to improve the rating of the Party of the Regions and other pro-government parties.  He says that Hebrew is not under pressure in the present legislation since the Jewish communities make all effort to support the language. He adds that national minorities should have the energy to defend their own language, and does not believe this is a matter for the state.

See links below for more detail

Photo and information about the vote from Ukrainska Pravda