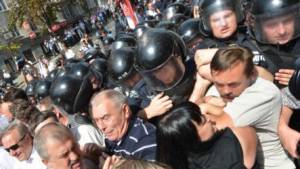 A political crisis has erupted in Ukraine after ruling party deputies pushed a bill that dramatically increases the official status of the Russian language through the parliament.

The speaker of Ukraine's parliament, Volodymyr Lytvyn, tendered his resignation one day after the vote, which took place late on July 3.

Police used tear gas, batons, and other forceful methods to disperse protesters in downtown Kyiv the day after the vote.

Opposition politicians are calling it a full-blown crisis and vowing to continue to battle the ruling party of President Viktor Yanukovych over the bill's fate and the way they believe it was bulldozed through parliament.

In a bid to defuse tensions, Yanukovych postponed a planned briefing on Ukraine's co-hosting of the recently completed Euro 2012 soccer tournament on July 4 to meet with Lytvyn and leaders of major factions.

"A full-fledged political crisis has started in Ukraine, " opposition leader and former parliament speaker Arseniy Yatsenyuk told a press conference after that meeting. "The so-called stability of Yanukovych has definitively collapsed. There is no more a myth about stability. There is a weak president, a deficient parliament, absent state institutions, a destroyed constitution, and a complete collapse of honesty, morality, and political responsibility of a so-called political elite of Ukraine."

The bill was rushed through a second and final reading by deputies of the majority Party of Regions, which is led by Yanukovich.

Opposition lawmakers tried and failed to physically stop the speaker from calling the vote, provoking scuffles with members of the ruling party. When that failed, they walked out of the intensely divided chamber in protest.

"I ask you to consider my resignation and take a decision on it, " Lytvyn told his fellow lawmakers.

Mykola Tomenko, a deputy parliament speaker, reportedly offered to step down along with Lytvyn.

The parliament's speaker and the president must each sign off on legislation before it becomes law.

Yatsenyuk insists the vote is inadmissible.

"Yesterday, the parliament approved a decision to vote on a bill to ban the Ukrainian language in an unconstitutional, unlawful, and inhumane way, " he said, adding, "There was no law adopted yesterday. There is no new law on the state language policy."

Two hundred and forty-eight legislators out of 364 present approved the bill in the lightning-quick vote on July 3.

Opposition activists the next day clashed with police outside parliament as they protested the bill's adoption and the ruling party's methods.

Some of the roughly 2, 000 protesters hurled bottles of water and sticks at the police, and both sides used pepper-spray against each other.

"The people of Ukraine protest against the dictatorship of President Yanukovych, " Ukrainian opposition leader and former parliament speaker Arseniy Yatsenyuk said of the protesters' demands. "He created a handmade Ukrainian parliament, which is not actually a parliament, it resembles a joint-stock company, and the key shareholder of this company is actually President Yanukovych. And he believes that the country is his personal property and we believe that the country is the property of the people of Ukraine. So we defend our country, we defend our constitution, and we defend our language."

Many protesters had stayed out on the streets overnight to express anger at the legislative maneuver.

PHOTO GALLERY: Tension was evident in the Ukrainian capital, Kyiv, on July 4 as protesters opposed to the Russian language bill gathered outside the site of President Yanukovych's abortive press conference on the recent Euro 2012 soccer championships. (Photos by RFE/RL's Ukrainian Service)

Yanukovich described the situation as a crisis in the legislature following the speaker's resignation.

National elections for a new parliament are scheduled for October 28.

Language policy is an emotive subject in the former Soviet republic of 45 million people whose state language is Ukrainian but where a significant number of people speak Russian as their mother tongue.

The leader of the opposition Udar party, heavyweight world champion boxer Vitali Klitschko, told Reuters at the scene of the protests in Kyiv on July 4 that "politicians are dividing our society."

"They themselves do their best, all they can, to divide the people, " Klitschko said. "There is no such issue as a language issue today, and we all know very well the names of the politicians responsible for this."

Supporters of the bill argue it will make life easier for the country's Russian-speakers by allowing their children to receive schooling in their mother tongue.

The bill would give Russian language equal status with Ukrainian across much of the country for use in legal discourse, business, and education.

It would recognize Russian as a "regional" language in predominantly Russian-speaking areas and enable its use in the public service.

Critics say this would undermine the Ukrainian language and threaten Ukrainian sovereignty.

Opposition parties have condemned the proposal as an attempt by the Party of the Regions to woo disillusioned Russian-speaking voters ahead of the parliamentary voting.