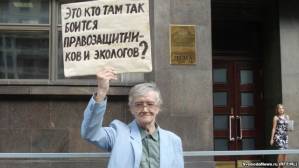 A supporter of the opposition Yabloko party protests against the NGO bill in front of the State Duma in Moscow on July 6. His sign reads, "Who is it in there who’s so afraid of rights activists and ecologists?"

Russia’s lower house of parliament has given initial backing to a bill that would force internationally-funded NGOs to re-register as "foreign agents."

The bill, sponsored by the ruling United Russia party, was supported by 323 deputies in the 450-member State Duma deputies in the first of three required readings. Four deputies voted against the bill and one abstained.

In protest, the opposition A Just Russia faction boycotted the vote. Protesters also picketed in front of the Duma building as the bill was being debated.

Under the bill, all Russian NGOs funded from abroad and ruled to be involved in politics, or acting in the interests of foreign states and other international donors, will have to carry a "foreign agent" tag and submit to more rigorous checks by the authorities.

Those include financial audits and a requirement to issue twice-yearly reports on their activities. Those who file incomplete reports face fines of up to 1 million rubles ($30, 240). Violations of the new measures would be punishable by prison terms of up to four years.

Organizations that fail to re-register as foreign agents within 90 days after the law comes into force would be shut down for a period of six months.

"It only calls for honesty, " said United Russia deputy Irina Yarovaya, who co-authored the bill.

Critics say the bill is a new and potent tool for the authorities in their crackdown on the opposition that followed unprecedented winter protests against marred elections and Russian President Vladimir Putin.

During the protests, Putin had accused foreign governments, including the United States, of propping up opposition parties and protesters.

Tanya Lokshina, the deputy director for the Moscow office of the international NGO Human Rights Watch, told RFE/RL that the result of the July 6 vote was "unsurprising" given the ruling party’s domination of parliament.

"While on the one hand, some next-to-insurmountable obstacles will be created for their work in the form of very burdensome reporting procedures, in addition to that, and primarily, the law is targeted toward demonizing and marginalizing them in the public opinion."

Many NGOs in Russia rely on foreign grants because funding is largely unavailable in Russia.

Earlier, Mikhail Fedotov, the head of Putin’s advisory human rights council, said that the bill "contradicts the Russian Federation’s constitution, which calls for political diversity and ensures every citizen has the right to participate in managing state affairs."

Western governments have also expressed concern about the bill, which is apparently being fast-tracked through the Duma.

Maja Kocijancic, spokesperson for EU foreign policy chief Catherine Ashton, noted that consideration of the new measures comes on the heels of another controversial law that for people found guilty of taking part in unsanctioned rallies. Adopted in June, it was also rushed through parliament despite pleas from rights activists.

"We are still talking about a draft law at the moment, but what we see right now is not particularly encouraging, " Kocijancic told RFE/RL.

"We believe that the new draft law would, if adopted, impose even further restrictions on foreign-funded NGOs and could, at the end of the day, even affect the support that the European Union is offering to NGOs, " she said.

"The EU will, of course, closely follow the debates on the law and all of the possible repercussions and Russian civil society and fundamental freedoms."

During the debate on the bill, A Just Russia deputy Ilya Ponomaryev pledged the opposition would campaign against United Russia in the future by referring to it as "the party of foreign agents."

The second and the third readings of the bill are expected next week.