The Kivalov-Kolesnichenko Language Bill must not be signed into law!UABA: Statement regarding the Principles of Language Policy ActLanguage and constitutional reform: dangerous trendsFirst December Initiative condemns “language” coup in parliamentReligious leaders urge President not to sign divisive language billKyiv erupts over language billConfrontation, teargas and political impasse over language bill“Russian” language bill pushed throughSo how much would the new language law cost?Playing with AmbiguitiesAssessment of the Draft Bill on Principles of State Language PolicyStatus of the Russian language takes 31st place in Ukrainians’ prioritiesNot all national minorities want controversial language law’s “protection”Riot police, tear gas and confrontations as language bill passed at first stageLatest use or abuse of the “language issue”Call to reject draft bill on language policyCongress of National Communities speaks out over recent criticism of OSCE officialPolice buy up special means. For the elections?Cherkasy court bans political protest for nearly 2 monthsLanguage law prompts most protests in three years
• Topics / Politics and human rights
• Topics / Freedom of peaceful assembly

A Berkut riot police unit has demolished a tent camp holding protesters against the Law on the Principles of State Language Policy “adopted” in a blitzkrieg move on Tuesday. Gazeta.ua reports that the protest’s organizers –  Mykola Bulatetsky from BYUT and his son Maxim have been arrested.

One of the organizers, Leonid Datsenko says that the Berkut unit did not leave after they dispersed them the first time. They returned to Soborna Square with tents. He adds that they didn’t expect them to have time to submit a new application.

Within an hour the authorities had managed to get another court order and the Berkut officers were sent to get rid of them again. “This time they did a thorough job of demolishing it, with the tents ripped up and crushed. Mykola Bulatetsky was detained and taken away, it’s not known where. His son was detained by the Cherkasy police, while Mykola by Berkut. Together with Bulatetsky they detained a few other guys. We don’t know where they are now”,

A witness asserts that they beat up Mykola Bulatetsky and that his son was flung into the boot of the car. The same person asserts that they also used rough measures against women journalists.  Several of the protests were bleeding.

Ukrainska Pravda reports that the Cherkasy Regional Udar Party believes that the people calling themselves communal services staff were in fact members of the local “Young regions” organization.  They say that one of their activists, Yaroslav Nyshchyk, head of the Cherkasy district party headquarters, was detained by the police.  He was apparently sent for a drug test and then taken to the police station.

The day before the Cherkasy City Mayor Serhiy Odarych made a public appeal to the President complaining that the country does not have the money to implement the norms of the new language bill. 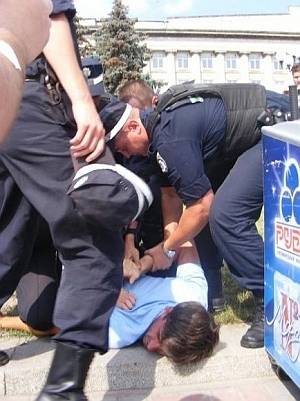