Following a stoning incident by unidentified assailants, the“Last Barricade” bus carrying sound equipment for the anti-language law protest outside Ukrainsky Dim [Ukraine House] in Kyiv has been stopped by Berkut riot police.  According to an Ukrainska Pravda correspondent, the Berkut officers have prevented the bus from driving up to the place where the protest is based.  As reported, protesters, some on hunger strike, have been holding an ongoing protest since the scandalous blitzkrieg operation in parliament on 3 July during which quite flagrant infringements of parliamentary regulations compounded many other reasons making the draft law extremely contentious.

The Berkut officers claimed that they were entitled to stop the bus as it was moving along the pavement. Calls from two MPs Yury Stets and Oles Doniy for the police to move away were met with abuse.

According to Doniy’s assistant Viacheslav Ponomaryov, one of the police’s arguments is that they’re protecting public order because the vehicle could plough into people.  He points out that since people move aside to let the bus through, there are no legal grounds for stopping it, and assumes that the officers are obeying an order “from the top”. 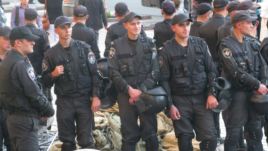