Holodomor : what is the Kremlin afraid of?In Russia books about Bandera and Holodomor classed as extremistRussia’s State Duma takes first step towards Internet censorship
• Topics / News from the CIS countries 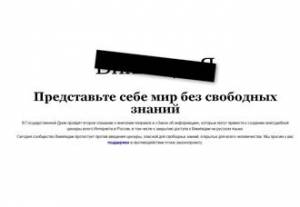 The Russian version of Wikipedia has shut down for 24 hours in protest at a law that would give the government powers to blacklist certain sites.

Visitors to the site see a black line across the site’s logo and a message explaining the move.

But Wikipedia likens the proposed law to the Great Firewall of China.

Internet users and human rights activists have both argued that the scope of the law would be too wide, allowing officials to select "subjectively" which sites to blacklist.

The government is seeking to make amendments to its Act for Information, which is due for review in the Duma, Russia’s parliament, on 11 July. If approved, it would allow the government to set up an agency which would maintain a list of banned sites.

Visitors to Wikipedia are greeted with a message which, when translated, says: "The State Duma is expected to hold a second hearing about amendments to the Information Act, which could lead to the creation of extra-judicial censorship of the entire internet in Russia, including banning access to Wikipedia in the Russian language."

"Today the Wikipedia community voices protest against the introduction of censorship, which is dangerous for the freedom of knowledge - something which must be open-access for all mankind."

In a linked page explaining its decision, Wikipedia’s authors go on to say the move "could become the basis for real censorship of the internet through the creation of a list of banned sites and IP addresses and the subsequent filtering of access to them".

Comparing the Russian plan to Beijing’s attempts to block information on the internet that it deemed controversial, they added: "Lobbyists and activists who support these amendments claim that they are aimed exclusively against child pornography and ’similar types of content’, but if one adheres to the provisions and stipulations of the suggested amendments they would lead to creation of a parallel to the ’Great Firewall of China’ in Russia."

Russian Communications minister Nikolai Nikiforov said on Twitter: "I do not support the idea of shutting down Wikipedia. Its step is an important reaction by the web community which says that the law [submitted to the Duma] needs to be improved."

The Russian Human Rights Council, which advises President Putin, has also suggested that parliamentarians should remove the bill from consideration and instead discuss the changes at an open public hearing.

The English-language Wikipedia site staged a similar temporary shutdown in January to protest against the Stop Online Piracy Act (Sopa) in the US Congress.