Russian Wikipedia goes dark in protest at censor lawHolodomor : what is the Kremlin afraid of?In Russia books about Bandera and Holodomor classed as extremist“He lay on the sidewalk, naming towns and cities in Ukraine”. A digest of anti-war activities in Russia, 23-29 JulyRussia threatens deportation from Kherson & Zaporizhzhia oblasts for pro-Ukraine views and for ‘discrediting’ the invaders “We can"t clean ourselves from the blood” – digest of Russian protestsVermin, filth and cold in Russia’s torture of imprisoned Crimean Tatar journalists and activists Attack on major human rights watchdog augurs new weapon of repression in Russian-occupied Crimea Germany’s Nord Stream 2 collaboration comes as Russia holds a record number of Ukrainian political prisoners Activist who exposed Russia’s hypocrisy about Ukraine gets 6-year sentence for social media posts Terrorism charges in Russia – for a social media repost and for supporting Ukraine Crimean Resistance to Russian Aggression and Moscow’s Savage Revenge Record sentence in mounting persecution of Jehovah’s Witnesses in Russia and occupied Crimea Exposing the ‘experts" who secretly help to imprison Crimean and Russian political prisoners A brief description of the KHPG strategic litigations in July–December 2020MPs challenged to fight Russian repression by adopting a Ukrainian political prisonerMore Than 1,000 Detained In Belarus As Protesters Face Tear Gas, Stun Grenades, BeatingsUkrainian court ban on book about Stus trial gave Medvedchuk more than he asked forSerious threats to freedom of speech in revised version of Ukraine’s contentious media billNariman Memedeminov freed after sentence for reporting on political trials in occupied Crimea
• Topics / News from the CIS countries 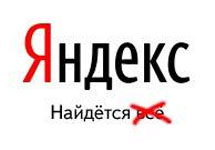 The picture says: YANDEX  You’ll find everything, with the word everything crossed out

Russia’s parliament on Wednesday passed in its second and third readings a bill on creating a single register of sites “with unlawful content”.  The list of banned sites which can be closed down without a court order is to be created starting from November 2012.

In theory the bill is aimed at fighting content harmful to children – child pornography, instructions on committing suicide and drugs.  Sites with other prohibited information would require a court order to be closed.  The bill has been widely criticized and it is feared that it will serve as a form of censorship of the Internet in a country where this has been the last remaining bastion of free speech. .

The Internet will be monitored by an operator to be appointed by a special body with authorization from the government. If unlawful content is found, the operator will be obliged to tell both the owner of the site and the provider.  The owner has 24 hours to remove it, after which the provider is obliged to do so.  If neither does so, then the site – the IP address overall is added to the register.

One small achievement added to the second reading was a norm allowing site owners to appeal through the courts against an assessment finding prohibited information.

There has been strong opposition to the law from civic and media organizations.  The search machine Yandex, LiveJournal, V Kontakte, the Russian Google and Wikipedia joined in warning of the bill’s danger and as reported, Russian Wikipedia went black for 24 hours in protest.  The Human Rights Council under the President and the Russian Association of Electronic Communications also criticized the bill.

This bill comes soon after a law which imposes draconian fines on those perceived by the authorities as breaching the law or public order during demonstrations.  It also largely coincides with a bill which proposes making all NGOs receiving foreign grants having to register as “foreign agents”.