Defendant in Lutsenko Trial: I’m here for refusing to testify against Lutsenko 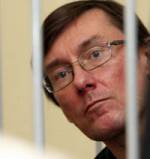 Friday’s court hearing into the second trial of former Interior Minister and opposition leader Yury Lutsenko was visited by a delegation from the European Parliament headed by former Polish President Aleksander Kwaśniewski and former EP President Patrick Cox.  The latter had visited both Yury Lutsenko and Valery Ivashchenko on Thursday and also met with the two former government members’ wives and lawyers.

Just after the delegation entered, and after the presiding judge had already announced that the case material had been studied, and that they were moving on to questioning the defendants, the Prosecutor asked for another volume of the material not previously separated from the original trial against Lutsenko to be added.  Yury Lutsenko objected, saying that the material had nothing to do with the case, and if that were added, then so should be all the files.

Presiding Judge Medushevska however allowed the Prosecutor’s submission and began studying yet another volume of material.

Yury Lutsenko, on his part, lodged a submission for the Interior Ministry’s internal instruction to be added to the file material, saying that he could not defend himself without this document. “I don’t understand at all how you can examine a case without demanding the document I am accused of having infringed.”

The Prosecutor objected, saying that the document was not mentioned in the indictment. Judge Medushevska decided on the spot to not allow this submission, calling it “premature”. Yury Lutsenko and his defence lawyer asked for their complaint about the actions of the presiding judge to be recorded in the protocol.

Medushevska then announced a technical break and the EP delegation left.

The first of the defendants to be questioned was Oleh Pavlenov. He stated that neither he, nor the other two defendants - Yury Lutsenko and Volodymyr Tarasenko were guilty. He stated that he considered his actions with regard to Valentin Davydenko, driver of the former Deputy Head of the SBU [Security Service] Volodymyr Satsyuk to have been lawful.

He said that the Davydenko case was part of an investigative operation under the category “crime” and as such was only time barred after 15 years.

He said he was convinced that they had not broken the law especially since the Prosecutor General’s Office investigator Halyna Klymovych had given them new information justifying the surveillance.  He said that he believed he had been interrogated because they knew he had had conflict with Klymovych.

He also asserted that he had been asked to give false evidence against Yury Lutsenko before being charged with any offence himself.  He said that he was phoned by PGO Investigator Voichenko and asked to come to see him without a lawyer.  He says that this was already after Lutsenko had been arrested. That he was told to give testimony against him. When he asked how he could testify when he had nothing to say, he was told by Voichenko “We’ll tell you”.

Lutsenko is accused of having organized the unlawful surveillance on Valentin Davydenko, driver of the former Deputy Head of the SBU.  Yushchenko had been taken ill in 2004 after dining with SBU people at the dacha of the SBU Deputy Head.