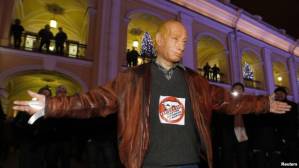 An opposition activist wearing a Vladimir Putin mask and a T-shirt reading "Against the Party of Swindlers and Thieves."

Igor Chestin appears to be on to something. In a recent interview with RFE/RL, the director of the World Wildlife Fund in Russia said he and his organization plan to use to their advantage soon-to-be-enacted legal requirements that require NGOs receiving funds from abroad to register as "foreign agents."
"We’ve decided to turn the phrase ’foreign agent’ into a kind of mark of quality, " he said. From now on, he explained, WWF’s materials will be published with the disclaimer, "We’re not swindlers and thieves. We’re foreign agents."

It’s a clever bit of political jujitsu. And the idea of reviving the "swindlers and thieves" moniker the opposition has so effectively used to re-brand the ruling United Russia party -- and deploying it to take the edge off a series of controversial bills they recently rammed through the State Duma -- is clearly catching on.

In a post on July 16, anticorruption blogger Aleksei Navalny, who first coined the phrase, dusted it off again to take on a recently passed bill making slander and libel criminal offenses.

"Congratulations to United Russia for working so well to protest yourselves, " Navalny wrote.

The post, titled "Let’s Fight Slander Together, " linked to a PDF document on mock United Russia letterhead that Navalny encouraged his supporters to post on their apartment buildings:

Recently there have been cases of United Russia being slandered with the inaccurate slogan: ’The Party of Swindlers and Thieves.’

Unfortunately, this wide-ranging disinformation campaign has had some success. According to public opinion polls conducted by the Levada Center:

Our party considers this tendency unacceptable.

We would like to officially announce that there are no swindlers or thieves among the members of our party, or in the state and municipal structures of the Russian Federation (especially if they are members of United Russia).

Of course, there have been some criminal cases against members of our party for embezzling from the budget of the Russian Federation, but they have all been acquitted.

In order to avoid criminal penalties, we recommend that you use the following informal names for our party: The Party of Our Children’s Future; The Party of Not-Bought-Off Officials; or The Party of the Harmonious Family.

If you happen to see any graffiti calling United Russia the Party of Swindlers and Thieves, we ask you to correct it using one of these recommendations.

As I have blogged recently, the asymmetrical warfare tactic of using humor and mockery as political weapons against the authorities has been in vogue of late.

Some opposition figures are even using it as a business opportunity. Socialite turned social activist Ksenia Sobchak, for example, recently starred in a video advertisement (below) for Tinkoff Bank that mocked a search of her apartment by agents from the Investigative Committee.

This could all be quite successful in moving public opinion.

Putin’s approval rating (somewhere between the mid-50s and low 60s depending on the poll), after all, is not nearly as solid as it looks at first glance. As political analyst Kirill Rogov pointed out in a much-discussed article last week, just 15-20 percent of this support is firm, while 40-45 percent is soft and conditional.

And more mockery will surely soften it more.
-- Brian Whitmore