Chief Editor of LB.ua leaves Ukraine over threat of criminal proceedingsNew twist in the Landyk scandal with pressure on critical websiteLandik gets suspended sentence and is releasedLandik Trial: Doctor asserts that MP’s son suffered more than his victimTrial begins of Roman LandikRoman Landik and his victim reach an “agreement”Unlike members of the opposition Roman Landik at liberty to wanderRoman Landik extradited to Ukraine to face chargesRussian “extradition check” regarding LandikProsecutor General seeks Landik’s extradition from RussiaCivic activists demand real liability for Deputy’s son LandikProsecutor’s son accused of causing the death of three pedestrians released on bailTwo former subordinates of Yulia Tymoshenko released pending trialJudge is in a hurry with Tymoshenko trialPolish Ambassador: Prosecuting opposition politicians can lead to bad habitsTime to name names, Ms ClintonWhile Lutsenko criticized the court, his property was being frozenUS State Department: On the Prosecution of Ukrainian Opposition LeadersEuropean Commission Ambassador calls conditions of Tymoshenko trial inhumanBBC: Tymoshenko on trial in Kiev for abuse of power
• Topics / Freedom of expression 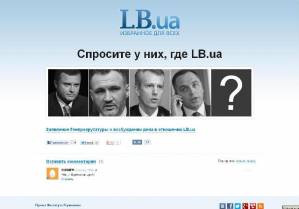 The Pechersky District Prosecutor’s Office announced on Wednesday that it has initiated a criminal investigation into alleged violation of the personal rights of Party of the Regions MP Volodomyr Landik (under Articles 163 § 2 and 182 § 2 of the Criminal Code). The articles concern infringement of confidentiality of letters or other correspondence of a public figure , and unlawful retention, use or circulation of confidential information about a person which did significant damage to the person’s rights, liberties and interests.

We reported at the end of June that six months after Roman Landik, son of a Party of the Regions MP, had received a suspended sentence for a shocking assault on a young woman fully captured on video, his father had tried to get criminal proceedings initiated against the Editor of the Internet publication Levy Bereh [lb.ua]  Sonya Koshkina [formally Ksenya Vasylenko]; Main Editor Oleh Bazar and photographer Maxim Levin

Landik Senior  approached the Pechersky District Prosecutor demanding that a criminal investigation be initiated under Article 163 of the Criminal Code (breaching privacy of correspondence with respect to state or public figures). His application referred to a publication from 18 November 2011 entitled “Landik Senior saves his son through the use of technical people and “correct” commentary on websites”. On 18 November during the parliamentary vote on the parliamentary elections bill, LB.ua photographed Party of the Regions MP Volodymyr Landik texting his son who was at that time in custody (after being extradited from Russia after the scandal broke out – translator).

LB.ua said that from the content of the SMS it was clear that in order to optimize his son’s image, Landik Senior was engaging political technologists as well as journalists from the Luhansk TV company to write positive comments in the news and texts about the Landik Junior trial.

At the time Landik Senior made various aggressive statements, including a demand that Ms Koshkina “publish her sanitary pads” but only approached the Prosecutor 8 months later (and just 4 months before the parliamentary elections – translator).

Shortly afterwards it was announced that Sonya Koshkina had left Ukraine

At the time the Prosecutor said that a check was being carried out, but that no criminal case had been launched, while Landik Seniro claimed  he was not doing this to put pressure on the publication.

Shortly afterwards there was a strange exchange of letters on the LB.ua site between Landik and Koshkina.

The announcement of a criminal case on Wednesday comes just days after the State Tax Administration announced that a criminal investigation had been initiated against Mykola Knyazhytsky, Director of TVi, which like LB.ua, only has material, interviews etc critical of the government.

On Wednesday evening, the LB.ua had closed down and was showing photos of the four people it suspects of being behind the persecution: Serhiy Lyovochkin, head of the President’s Administration and Andriy Portnov also from there; Renat Kuzmin, Deputy Prosecutor General and Valery Khoroshkovsky, now Minister of Finance, until earlier in the year head of the Security Service.  Khoroshkovsky is also a media magnate owning the Inter Media Holding.

The sign says: Ask these men where LB.ua is.

From reports at Telekritika and Ukrainska Pravda.