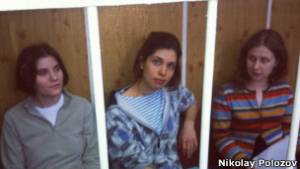 A Moscow judge has ordered three members of the feminist punk band Pussy Riot to spend the next six months in jail, prolonging a case that has highlighted the crackdown on freedom of expression in Vladimir Putin’s Russia.

The three women – Nadezhda Tolokonnikova, Yekaterina Samutsevich and Maria Alekhina – were remanded in custody until January 2013. They have been in jail since their arrest in March after performing an anti-Putin "punk prayer" in Moscow’s most important church, the Cathedral of Christ the Saviour.

Their supporters say the powerful Orthodox church, which has close links with Putin, is behind the drive to keep the women in jail. Top church officials have come out in favour of their incarceration. They face up to seven years in prison on charges of hooliganism.

Friday’s pre-trial court hearing marked the formal start to the group’s trial. Pre-trial hearings are due to continue next week.

Many religious Russians who initially took offence at Pussy Riot’s church stunt have since called for their release. A poll released on Friday by the Levada Centre, an independent pollster, showed that 50% of Muscovites surveyed were against pursuing the criminal case against the three women, while 36% supported it.