’Take this law and shove it!’ 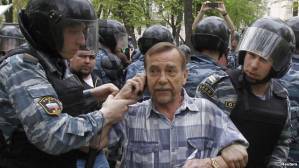 Riot police detain human rights activist Lev Ponomaryov during an unsanctioned protest in Moscow on May 7.

Lev Ponomaryov has decided to just say no -- and he’s not alone.  he head of the advocacy group For Human Rights announced this weekend that it would refuse to comply with a new law signed by President Vladimir Putin requiring NGOs receiving funds from abroad to register as "foreign agents" and subject themselves to extensive state scrutiny.

"We are declaring a campaign of civil disobedience to laws that have been passed in violation of the Russian Constitution, the European Convention on Human Rights, and other conventions that Russia has signed, " Ponomaryovtold Interfax.

"We will never be [foreign] agents and will not obey this law. We are agents of Russian citizens. We will continue to receive foreign grants and will speak about this openly."

And Ponomaryov indicated that he has no illusions about what such defiance might mean.

Speaking to "Nezavisimaya gazeta, " Ponomaryov said he was undeterred by the stiff fines and potential prison time that noncompliance could mean.

"We are continuing in the tradition of the Soviet dissident movement, whose members were not afraid of much harsher punishments, " he said.

And the civil disobedience campaign appears to be gaining momentum.

Svetlana Gannushkina, head of the group Civil Assistance, also said it would defy the law.

Arseny Roginsky, a former prisoner in the Soviet gulag and the founder of Russia’s largest human rights group, Memorial, says it will decide at a meeting in the autumn whether or not to comply with the law, which goes into effect in November. "But Memorial consists of many structures, and each has the right to make its own decision, " he said.

Speaking to the RIA-Novosti news agency, Memorial Chairman Oleg Orlov suggested that he was leaning toward civil disobedience.
"It’s humiliating and it would be foolish to go and register yourself as a foreign agent, "  Orlov said, adding that Memorial will "take all possible legal steps against discriminatory practices" established by the new law.

Thus far, Moscow Helsinki Group head Lyudmila Alekseyeva is the biggest name to resist the civil disobedience tactic. She told Interfax that she would stop taking foreign funding, seek Russian financing, cut back on programs, and auction off some of her belongings -- including her collection of Gzhel ceramics -- to keep the group afloat.  Ponomaryov said he still hoped to persuade Alekseyeva to continue taking foreign funding.

The civil disobedience campaign comes at a time when the opposition has been openly mocking and ridiculing the authorities’ attempts to crack down on them.
It is still unclear how far the rights groups will take this campaign of disobedience. And it won’t be clear how much the Kremlin will crack down on them until the law actually comes into effect in November.

But if they stick to their guns until then, they will add to what is already shaping up to be a very difficult autumn for Putin and his ruling circle. The Kremlin already has to deal with what looks to be tough and complicated regional elections in October. The authorities have long planned, after the summer recess, to enact painful reforms of Russia’s creaking social-welfare bureaucracy, which are bound to be unpopular. Moreover, economic uncertainty remains high amid fears of contagion from the eurozone and volatile energy prices.

If you throw in the prospect of an open civil disobedience campaign, it may not add up to a perfect storm -- but it is certainly a recipe for a very hot autumn.