Gypsy Camp set alight in Kyiv – “for Euro 2012”New feat from Yanukovych’s village authorities – this time racistCouncil of Europe’s Anti-Racism Commission publishes new report on UkraineTernopil Prosecutor “finds no racism” in scandalous articleTernopil Prosecutor promises to check “whether” offensive article is racistCrime rate among Roma lower than the national averageECHR finds Ukraine guilty of discrimination and more over investigation into fatal arson attackRoma Strategy – for government eyes alone?A brief description of KHPG strategic litigations in 2016A brief description of KHPG strategic litigations in the first half of 2016Political PersecutionsYanukovych’s mysterious guards at Mezhyhirya14. VULNERABLE GROUPS AS TARGETS OF DISCRIMINATION, RACISM, XENOPHOBIA AND HATE-RELATED CRIMESStop Censorship appeals against ban on protest outside President’s ResidenceHuman rights in Ukraine – 2008. 12. SOME ASPECTS OF THE RIGHT TO PROTECTION FROM DISCRIMINATION AND ON COMBATING RACISM AND XENOPHOBIA
• Topics / Prohibition of discrimination

UHHRU defends Roma whose camp was destroyed for Euro 2012 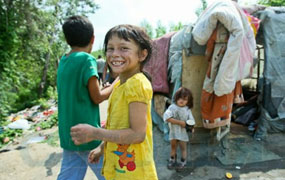 As reported, on the eve of Euro 2012 a Roma camp in Bereznyaki in Kyiv was set alight, seemingly at the instigation of the authorities. Up to 60 people were left homeless.  50-60 Roma came a few years ago to Kyiv from the Transcarpathian region and set up camp on the edge of an industrial and construction rubbish dump living by selling the metals and other things found there.  More details about the camp being set alight presumably because the camp could be seen from the trains bringing football fans to Kyiv.

Some of the Roma have returned.  At a press conference on Tuesday the lawyer representing them, Olena Sapozhnikova explained that three of the victims of the arson attack had approached the Ukrainian Helsinki Human Rights Union asking it to defend their interests.

“Together with the President of the National Union of Civic Organizations of the Roma of Ukraine Congress Petro Hryhorychenko, we made an official approach to the Kyiv Prosecutor and the police on the basis of these appeals. At present an official enquiry is underway. We went with the investigator to question the people who have dared to return to the same place”, Ms Sapozhnikova said.

Around 10 people have returned, being those, she says, who approached UHHRU and other civic organizations. Three have submitted statements regarding the events of 30 May when they say that more than 10 people, some in uniform turned up and began pushing people out of the tents, forcing the men to undress to the waist, making them form a row and photographing them on their mobiles, ridiculing them.

They noted that nothing was taken and believe that the action was about “clearing” Kyiv before the football championship.

While the uniforms were not police ones, some of the Roma recognized police officers who had earlier given them a hard time.