Ukrainians could lose any control over public procurement 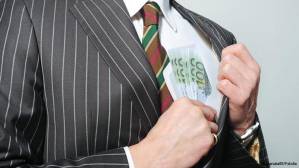 A law which threatens to remove the last possibilities for monitoring how taxpayers’ money is spent has been passed to the President for signing.

As reported here, draft Law № 9634 on Amendments to Some Legislative Acts on Public Procurement was signed on 4 July.

Oleksy Khmara, Head of TORO, the contact group for Transparency International in Ukraine:

In an interview to Deutsche Welle Oleksy Khmara explained that the law removes more than 200 billion UAH of public funding from tender legislation. The only exclusions where tenders will not be waived are where the procurer holds a monopoly, and procurement directly funded by the State.

Vitaly Shabunin, Head of the Centre for Countering Corruption also stresses that Ukrainian taxpayers are being prevented from monitoring how their money is spent. If there are no tenders, then there’s no information about how much was spent and on what. “Unless people ask where their money for roads is there won’t be anything. The issue of how taxes are being stolen unites us all against the authorities. This is the main fear of those in power who have official mandate”, he says explaining the motives of those MPs who voted for the bill.

Vitaly Shabunin estimates that up to 500 billion UAH should be under tender legislation this year.  He believes that around a third of this is stolen, and that with the new law this amount will rise exponentially.

The civic activists are concerned that some of the money being hidden from the public eye will be used for the election campaign by candidates in single-mandate electoral districts.

Ukrainians do care how their money is spent. Confirmation of this is seen in the enormous popularity of the journalist project “Nashi Hroshi” [Our Money] which uses the Public Procurement Herald to analyze how the authorities are spending billions of taxpayers’ money.  You can read about the raspberries bought for the President’s Administration at a super expensive cost, about Mercedes for officials bought under the guise of rubbish vans. Oleksy Shalaisky, Head of the Nashi Hroshi project says that although people will be able to submit formal information requests, they simply won’t know what they should be asking.  He says that people are actually coming to them and bringing information about how public funding is being carved up. They check it and report it.

A similar bill was attempted a year ago. Then Yanukovych vetoed it after the EU and World Bank took a very hard line making it clear that financial aid for reforms in administration of public funding would not be forthcoming if such a non-transparent law came into force.  Financial aid was then frozen.

Deutsche Welle was told in EU diplomatic circles that the EU is presently studying the draft law. “If our experts conclude that administration of public funding will deteriorate due to this draft bill, financial support for these projects will be postponed indefinitedly. And that is a move backwards in our bilateral relations”, they say.