For their freedom and ours 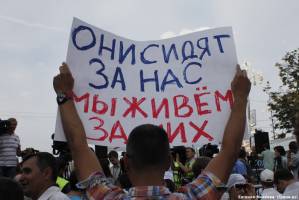 The banner reads: "They’re inside (imprisoned) for us, we live for them"

In Moscow and other Russian cities on Thursday demonstrations took place calling for the release of activists detained over clashes on Bolotnaya Square on 6 May, on the eve of Putin’s highly controversial inauguration for a third presidential term.

Grani.ru reports that the authorized demonstration in the centre of Moscow was attended by around two thousand people (as always the figures vary – Ekho Moskvy reports the police as claiming the number to have been around 800).

The protesters demanded the release of those remanded in custody, the three young members of Pussy Riot and other political prisoners.  They chanted “Putin is a coward”, “No political repression”, and “One for all and all for one”.

The meeting was addressed by relatives of political prisoners, civic and human rights activists. 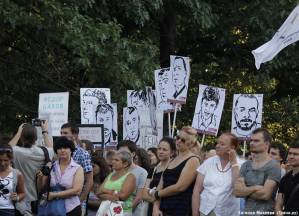