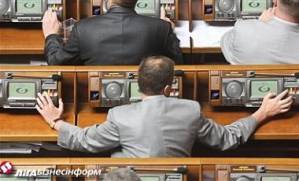 A parliamentary "vote" in breach of Ukraine’s Constitution which stipulates that MPs vote in person.  Billionnaire Party of the Regions MP Renat Akhmetov has not been seen in the Verkhovna Rada for two years at least, but his card "votes" for all government bills

Ukrainian MPs have been recalled from their summer vacation for a special parliamentary session on Monday, 30 July.  There is little honour among Ukrainian politicians and those hoping to push through the highly controversial Kivalov-Kolesnichenko language bill cannot be sure of the outcome.  The outcome, that is, of Monday’s Verkhovna Rada show since the grave ramifications for the country of recent legislative strongman tactics in the face of serious analytical criticism of the draft bill and civic protest clearly leave them cold.

The “language issue” – whatever the verbiage used, this is in essence the role of the Russian language – has been dragged out and flogged for what its worth before every election since Independence.  The stakes in 2012 are, however, significantly higher.  This is both because a law which effectively bypasses the Constitution to give Russian dominant position in Ukraine has been “passed” and because of the number of procedural irregularities which make it impossible to describe the legislative process without inverted commas.

The bill’s authors - Party of the Regions MPs Vadim Kolesnichenko and Serhiy Kivalov, as well as their party colleagues, continue to assert that the law is in keeping with the European Charter on Regional and Minority Languages and has received a favourable Council of Europe’s Venice Commission assessment.  The latter’s criticism of the bill is admittedly only in English but it is likely the authors are aware of its actual substance and simply assume that the public are not.  Nor does public clarification help as we saw last week when Knut Vollebaek, the OSCE High Commissioner on National Minorities followed up a visit to Ukraine with a public statement calling the situation around the new language law “deeply divisive” and urging the authorities to engage in dialogue.

Kolesnichenko’s response cannot be considered either adequate or helpful given that Ukraine is scheduled to hold chairmanship of OSCE in 2013.  Mr Vollebaek’s comments, according to Kolesnichenko, show the desire of European politicians to destabilize the situation in Ukraine, while the comment that “all countries in which Vollebaek worked as a diplomat have faced inter-ethnic conflicts” is not only offensive, but seriously off-track.  As is his claim that Mr Vollebaek’s position clashes with the supposedly “positive assessment” from the Venice Commission.

The Party of the Regions which is pushing this bill is not only distorting the position taken by European bodies.  The same criticism has been made by all profile institutions of the Ukrainian Academy of Sciences, the Verkhovna Rada’s Legal Department; the Finance and Justice Ministries, the Parliamentary Committee on Culture and Spiritual Matters; the Congress of National Communities; the All-Ukrainian Council of Churches and Religious Organizations and a huge number of civic organizations.

The technique is brutally simple: ignore all well-argued objections and just ladle on the distortions and the emotional rhetoric.  The latter will be remembered especially given the pro-government slant of most media coverage.

It is perhaps unfortunate that a majority of the population (65.1%, according to a survey by the authoritative Razumkov Centre) see this bill as election campaigning, while nobody is in any doubt that its aim is not to protect genuinely under-supported regional languages in Ukraine, but to allow Ukrainian to be effectively ignored in most parts of the country.  Such cynical realism means that the financial consequences, already highlighted by the Finance Ministry, were the law to really fulfil its declared aim, could either be crippling or lead to the courts being inundated with civil suits by members of minorities whose rights, now supposedly enshrined in law, continued to be flouted.

Brawls, “adoption” of laws with most “votes” being cast in the MPs’ absence (in clear breach of Article 84 of the Constitution) and other irregularities are also standard in Ukraine although the sheer audacity of the breaches in this case is breathtaking.

There had already been a number of infringements to procedure during the first reading on 5 June with such a controversial bill being voted on without discussion and with a large number of MPs absent.  The requisite month had not elapsed, nor had many amendments been discussed and added when, in the absence of Verkhovna Rada Speaker Volodymyr Lytvyn and the Deputy Speaker from the opposition, the other Deputy Speaker Martynyuk basically bulldozed a “vote” through in record time.

Nor has the immediate announcement by Volodymyr Lytvyn of his resignation proved an insurmountable obstacle, although according to the Verkhovna Rada Regulations only he can pass the bill to the President for signing.  Party of the Regions MPs lodged a submission to the Constitutional Court which with record-breaking speed, but with already standard obligingness, found a way around this impediment.  This way makes it possible for a small minority of physically present MPs to remove a recalcitrant Speaker.

There have been a huge number of statements issued about this language bill, as well as open appeals for endorsement.  They rightly warn of the deeply divisive nature of this law, as well as its real effect in undermining the Ukrainian language while not helping genuine minority languages in Ukraine.  The shocking irregularities in the way the draft bill has been pushed through and total lack of concern for public opinion are also another grave blow for Ukraine’s already beleaguered democracy.