Hundreds die each year due to traffic police corruptionFighting corruption: fine words and hard-hitting reportsPolice beat up journalist and civic activistFirst they’re beaten up, then charged with “hooliganism”End Impunity for violence against journalists!Freedom of Speech in Ukraine – 2012Nikopol journalist links grenade incident with his journalist investigationsRussian FSB officer charged over unlawful detention and torture of Ukrainian journalist Vladyslav Yesypenko ‘There was a human being, and the body was torn apart in an instant’ — a Mariupol graduate who went through hellUkrainian journalist’s sentence reduced because of a ‘confession’ obtained through Russian FSB torture“Do You Still Want This War?” Anti-War Activities in Russia, 3-9 July 2022Russia extends terror and abductions from occupied Crimea and Donbas to all of Ukraine Russia sentences two Crimean Tatars to 17 and 13 years for talking about their faith Savagely tortured Ukrainian journalist sentenced to six years by Russian occupation court Did ‘chief butcher’ of Izolyatsia secret prison in occupied Donbas work for Ukraine’s SBU? FSB’s ‘evidence’ against imprisoned Ukrainian journalist exposed as false in courtDonbas militants acknowledge the crimes committed by ‘chief butcher’ of Izolyatsia secret prison ‘Chief butcher’ at Izolyatsia secret Donetsk prison confirms key role of Russian FSB, but raises questions about Ukraine’s reaction Huge sentences and mass detentions for Crimean Tatar solidarity From Russia with torture : Vitaly Vlasov and other FSB perpetrators in occupied Crimea
• Topics / Law enforcement agencies 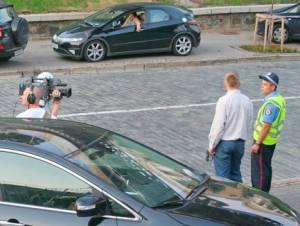 According to Letter M-387 from the State Automobile Inspection, the rules have now changed and a person videoing the actions of traffic police officers will face 15 administrative arrest (i.e. imprisonment).  through 15 days ad the traffic police,

According to Yurliga lawyer Vadim Volodarsky, holding people liable under Article 185 of the Code of Administrative Offences in such a situation is fairly problematical.

He stresses that liability under this article arises only if the actual demand or instruction from a police officer is lawful. How lawful can it be in such a situation?  You cannot speak of breach of inviolability of private life in the case of an official, in this case a traffic officer,   “At work his life is not private.” Mr Volodarsky points out that the Constitutional Court took this position on 20 January 2012 in its judgement.  In its judgement, the Court stated that with respect to the use of audio and video recordings and photos not all information can be protected by the law.

The lawyer considers the protection provided private life by Article 32 of the Constitution, but believes there can be no question that video recordings of a traffic police officer carrying out his duties violate his right to privacy.  The above-mentioned judgement stipulated that private footage, as well as CCTV footage can be used as evidence in a criminal case. If such video footage was by definition unlawful, then it could not be used as evidence.

Mr Volodarsky also cites Article 19 of the Constitution stipulating that “Bodies of state power and bodies of local self-government and their officials are obliged to act only on the grounds, within the limits of authority, and in the manner envisaged by the Constitution and the laws of Ukraine.”

He says that the chances of such cases succeeding in the courts are extremely doubtful.