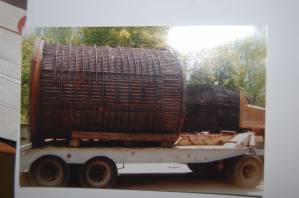 At a press conference on 27 July 2012, four days before he was fatally injured in a brutal attack, Volodymyr Honcharenko warned of highly toxic heat exchangers which environmentalists fear could be mixed with other scrap metal and sold, possibly abroad

At the press conference Volodymyr Honcharenko announced that there were three chemical time bombs in the Dnipropetrovsk oblast [region].

For many years in Kalusz (Ivano-Frankivsk oblast) a chemical production site produced hexachlorbenzol, a toxic chemical classified as first level hazardous. Heat exchangers were used in production of the chemical.  Volodymyr Honcharenko explained that over time these had lost their heat exchanging capacity and had been buried at a site in Kalusz.  In 2005 the heat exchangers were dug up by people trading scrap metal and sold to Ukr-Euro Ltd which on 26 February 2006 dispatched them to the public stock company “Mitall-Steel Kryvy Rih”. The metal constructions of the heat exchangers have 50% pulp containing hexachlorbenzol.  Three heat exchangers weighing altogether 183 tons and containing around 90 tons of the hazardous pulp ended up in the Dnipropetrovsk oblast.

Mr Honcharenko explained that in April 2006 when factory workers began cutting the constructions, they immediately felt dizzy and got nosebleeds, these being symptoms of poisoning from hexachlorbenzol fumes. The heat exchangers were returned to Ukr-Euro which, in order to conceal the danger, did a reshuffle, transporting them to the enterprise Yuhvtormetprom in Kryvy Rih, supposedly for storage.

The staff of Yuhvtormetprom, not suspecting anything, also tried to cut the heat exchangers.  They too were poisoned and ended up in hospital. In 2010 when Yuhvtormetprom got a new director – Savytsky – the situation was repeated and workers again poisoned.

The only solution is to convert the hazardous constructions but this costs a lot of money – 26 thousand per ton. Moreover such conversion is only possible abroad.  All of this would need to be carried out by the owner – Ukr-Eur.  The company is again headed by a Mr Kutsenko who worked temporarily for Yuhvtormetprom, and has now (following the heat exchangers?) returned to his old firm.  The heat exchangers were taken away on 9-10 July.

The heat exchangers when they overheat give off a toxic gas, and it is terrifying to imagine how much got into the air while they were being transported by truck in heat-wave temperatures.

Yuhvtormetprom workers say that after the load was taken away, they cleared 3620 kilograms of pulp from the ground.  How much more was spilt on to the road?

Civic activists informed all control bodies about the fact that the toxic scrap metal was being transported through Kryvy Rih.  Despite the fact that Ukr-Euro has no permit for transportation as well as the obvious danger, there has been total silence.

“We didn’t see one traffic police officer en route”, Mr Honcharenko said, “You get the impression that after we notified them, they all got frightened and hid.”

At first the heat exchangers were taken to Krvvbassmetrprom. However after activists showed photos to all relevant bodies of where the deadly load had been left, it was again moved to a technical base in the Saksahansk district. The Emergencies Ministry reported that the load was not in the city, and that it couldn’t be moved.

Volodymyr Honcharenko stated that having gone to this supposed new site they found no signs that the constructions were being stored there or had been moved. What is more, the road did not have capacity for the large vehicle technology needed. Nor did they find them at the last port of call, at Krvvbassmetrprom.

“However when a film crew from one of the central TV channels went to the supposed site in the Saksahansk district, the people from the Emergencies Ministry suddenly woke up and told us that they had even found the dangerous scrap metal and would be taking samples to test for radioactivity”.

Environmentalists believe that the plan is to cut up the heat exchangers at Krvvbassmetrprom and mix small amounts with scrap metal, sending it to metallurgic factories. And then the remains of the hexachlorbenzol might be buried at one of the ore-dressing and processing enterprise quarries in the Saksahansk district.

Mr Honcharenko warned that the site where the heat exchangers would be cut up is next to the Karachukovsk Reservoir which provides the city with drinking water. This would mean that 183 tons of poison could come into contact with people and the environment.

To understand the scale of the disaster, it is worth pointing out that a fairly large amount of scrap metal for metallurgic works are obtained and provided from the Chornobyl Zone. According to the SBU [Ukraine’s Security Service] over the last 20 years around 100 tones of scrap metal has been taken out of the zone each year, both with the permission of the authorities, and by metal traders on the black.

Dnipropetrovsk is of interest to metal traders because there is a freight port where metal is transported abroad.

At the beginning of January 2011 Turkey objected to consignments of scrap metal from Ukraine with excessive radioactivity.