Uzbekistan: Detainees Tortured, Lawyers Silenced“Dictator’s daughter” loses libel suit against French news websiteRussian Court accepts that refugees must not be extradited to UzbekistanEuropean Court orders Russia to find Muminov and pay him compensationStrasbourg finds Russia guilty of denying the right of petition to the CourtUzbek illegally expelled from Russia sentenced to 11 years in UzbekistanWorth their weight in questionsRussian authorities flout the European Court of Human RightsA less forgone conclusionWhat’s an administrative expulsion or two among friends?The UN express serious concern over reports of torture of people detained in Uzbekistan
• Topics / News from the CIS countries 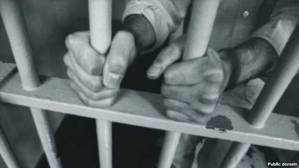 Some call it the "House of Torture, " others the "Place of No Return." Officially, it is Jaslyk prison -- the worst of the worst in a country whose penal system is notorious for harsh conditions and mistreatment of prisoners.

Uttering the name conjures images of fear and horror, fed by stories of prisoners being boiled alive and bodies of deceased inmates being returned to their families bearing horrific scars and bruises.

Former inmates recall gruesome methods of torture being employed at Jaslyk, including electric shocks, sexual assault, the pulling out of prisoners’ fingernails, and long stints of solitary confinement without food or drink.

"I don’t know which is worse -- Jaslyk or Nazi concentration camps during World War II, " says Juma Yusuf, an Uzbek poet and dissident who spent three years at the remote prison facility.
Electric Shocks
"Jaslyk is nothing less than a death camp. It feels like there is no limit to the cruelty the prison officers there are capable of, " recalls the poet, who was imprisoned in 2007 after he challenged President Karimov’s right to run for a new term in office.

"Every month, they would keep me in solitary confinement for 15 days. Another 15 days of each month I would spend in another facility in the town of Nukus, some 500 kilometers away, " Yusuf says.

"They would transfer me there in a small iron box -- too small to sit, too small to stand up. And it was a bumpy road and my head would bang against iron. There wasn’t enough air to breathe."

Jaslyk was set up in 1999 on the site of a former Soviet-era chemical-weapons testing area in the autonomous republic of Karakalpakstan, located in Uzbekistan’s northwest. The area is known for its harsh climate -- severely cold winters and hot and dry summer months.

The prison facility was opened following the deadly Tashkent bombings, which authorities blamed on religious extremists. Tens of thousands of people were arrested in the aftermath of the 1999 bombings and many so-called "religious prisoners" would end up in the newly established Jaslyk. The prison currently houses 5, 000 to 7, 000 inmates, according to the New-York Based Human Rights Watch (HRW).

​​It wasn’t long before Jaslyk -- despite its isolated location and secretiveness of Uzbek authorities -- came to the attention of media and rights activists.
In 2002, rights groups, including HRW, documented two suspicious deaths of Jaslyk prisoners whose bodies reportedly exhibited clear signs of torture.
Both men -- Muzafar Avazov and Husnidin Alimov -- were classified by HRW as "religious prisoners."

According to HRW, 60 to 70 percent of Avazov’s body was burned and "doctors who saw the body reported that such burns could only have been caused by immersing Avazov in boiling water."

’Placed In an Iron Box’

Based on witness accounts, HRW documented that Avazov also had a bloody wound on the back of his head and heavy bruising on his forehead and neck. His fingers had no nails.

"Since that time torture has really been one of the major focuses of the human rights community concerning Uzbekistan. Jaslyk has continued for the last decade to be the source of numerous reports -- credible and consistent reports -- of torture of so-called religious prisoners, " Swerdlow says.

Uzbek authorities insist the situation has since improved, and deny that torture is widespread in the country’s prisons. Several law-enforcement officers have reportedly been punished after being accused of mistreating inmates. The country, however, does not allow United Nations’ rapporteurs on torture to visit Uzbek prisons, including the notorious Jaslyk facility. The prison has come under increased scrutiny of late after Valeriy Parijer, a businessman with dual Russian-Israeli citizenship who has been imprisoned in Uzbekistan since 2002, was transferred to Jaslyk. The unexpected move came as Parijer’s original prison sentence was expiring. Instead of being released however, he was handed an additional five-year term for "breaking prison rules" and was sent to Jaslyk.

The issue has prompted action by the Israeli government, which has written to the Uzbek Foreign Ministry requesting that Parijer be transferred to another prison immediately and also calling for his release. Parijer’s wife, Irina, says Parijer has experienced "horrendous suffering."  "They put needles under his fingernails, " Parijer told RFE/RL’s Uzbek Service, and was placed inside an iron box for hours in the summer heat.

She fears for her husband’s life, and doesn’t believe Parijer would survive another five years in Jaslyk. She adds that a protest against her husband’s treatment is planned to be held next week in front of the Uzbek Embassy in the Israeli city of Ramat Gan.