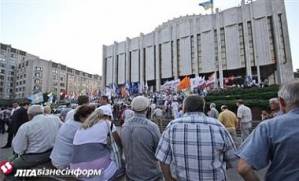 Protests against the language bill

On Wednesday, just one day after even a carefully selected group of “Ukrainian intellectuals” opposed the Law on the Principles of State Language Policy, President Yanukovych has signed it into law.

At the same time he “instructed the government” (led by non-Ukrainian speaking Prime Minister Azarov) to create a working group to ensure protection of the Ukrainian language.

Roman Kuybida from the Centre for Political and Legal Reform told Deutsche Welle that combining signing the law with creating a working group is “not a very logical step”.  He explained that the law takes force from the day of publication meaning that local councils in those places where there are no less than 10 percent populations of national minorities can immediately declare their languages to be regional.

Roman Kuybida predicts that politicians will hurry to use the right of local councils to declare languages region hoping to win votes in October. It is not inconceivable, he says, that 18 regional languages could appear in the country. “That means that now every law and act of the government should be translated into the languages of national minorities, for which there is no money and no professional translators”.

He is convinced that the President should have immediately sent the language law back for reworking, and not signed it and then rework it.

The bill has been opposed by a huge number of civic, religious, and human rights organizations, groups of national minorities, and very many others.

“There are indeed languages in Ukraine which require state support, however this is not Russian, but Crimean Tatar, Gagauz, Roma, Karaim and Krymchak, Urum and Rumeisk languages, as well as Yiddish. It is these as minority languages which the European Charter of Regional and Minority Languages protects. European legislation upholds linguistic diversity and is aimed at protecting disappearing languages.

The authors of the draft bill are fighting for a situation where citizens don’t speak Ukraine, don’t study it or use it, instead giving significant preferential treatment ot the Russian language. You cannot resolve the language problems of national minorities in this way.

It should also be noted that the draft Law on the Principles of State Language Policy has not received an unequivocally positive assessment either among national minorities or among the Ukrainian public as a whole. Furthermore Ukraine’s national minorities have not once discussed this draft bill in open, have not heard the arguments of its authors, and have not expressed their own views and comments.

The draft law poses a threat to Ukrainian society since it disregards the State status of the Ukrainian language, does not protect minority languages at risk and arouses dissent and tension in Ukrainian society.

The National Communities of Ukraine wish for integration into Ukraine’s civil society. They wish to build a shared home which will not be destroyed for the sake of opportunistic interests.