Police do nothing as Crimean Tatar monuments defiled 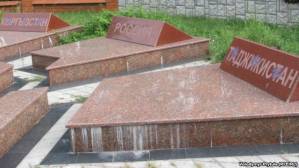 The Mejlis of the Crimean Tatar People is outraged over the passiveness of the law enforcement bodies in investigating a number of acts of vandalism targeting sites of cultural and historical significance for the Crimean Tatar people.

Over the last month swastikas have been daubed over a huge banner with a portrait of the pilot Amet-Khan Suttan on one of the central squares in Simferopol.  A swastika was also drawn on the panel of the Crimean Tatar flag in another square. Several days ago a memorial complex in remembrance of the victims of the Deportation of the Crimean Tatar People was also similarly desecrated. The Mejlis believes that those responsible are behaving like this because they are sure they can act with impunity.

The police say that criminal investigations have been initiated over the first two instances, while the situation with the memorial complex is being studied.

On the morning of 8 August swastikas were found painted with purple paint on 4 memorial stones with the names of republics to which Crimean Tatars were deported – Uzbekistan; Kyrgystan; Tadzhikistan and Kazakhstan. Only the stone for Russia was untouched.

The Crimea’s leaders have not reacted in any way to these acts of vandalism. Only the portrait of Amet-Khan Suttan has been changed.

The Leader of the Mejlis Mustafa Dzhemiliev believes that the lack of any investigation into dozens of acts of vandalism against Muslim cemeteries and Crimean Tatar places of significance has led to the culprits becoming more brazen since they feel sure they won’t be punished.  He says that in general a spirit of chauvinism is rife within the bodies of power in the Crimea.

From a report by Volodymyr Prytula here http://radiosvoboda.org/content/article/24672433.html