“Most journalists in the regions are in fact State Administration employees” 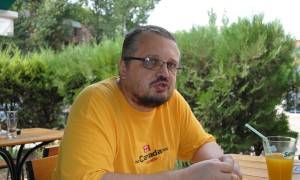 Dementiy Bily is well-known as the head of the Kherson Branch of the Committee of Voters of Ukraine [CVU], a journalist and the person who finally won his case against the deputy from the Party of the Regions Deputy of the City Council, Viktor Shevchuk.  As reported here, on 14 September 2010 Dementiy Bily was pushed out of the theatre where the Mayor of Kherson was giving his “report” to a closed audience and beaten up.  He had objected to the refusal to allow members of the public into the theatre despite there being seats free and, taking a microphone, called on the Mayor to have them admitted. Instead three men shoved Dementiy out into the foyer, where one proceeded to inflict blows to his face. The police did nothing until Dementiy’s camera hit the main assailant - Viktor Shevchuk, on the forehead as he tried to break free.  They then drew up a protocol against Dementiy Bily for an administrative offence as supposedly having caused the fight.  More details here

Roman Kabachiy from the Institute for Mass Information noted that throughout the country there is an increase in commissioned political material and asked about the situation in Kherson.

Dementiy calls “jeansa” or commissioned material a typical phenomenon for the local press and a means for journalists to earn money during the election period which they look forward to for this reason. He says that the Law on the Elections encourages this, since according to it, jeansa is political advertising.

Roman Kabachiy points to 2 issues of the regional newspaper New Day which is headed by Anatoly Zhulyna, member of the Commission on Journalist Ethics. Both issues have commissioned material in exactly the same places about two candidates – Oleksy Zhuravko and Kateryna Samoilyk without any marking.

Dementiy Bily confirms that this will continue until the elections, since the spots have already been bought, with this being a problem for other candidates. Only the strongest morally speaking editors mark advertising as political.

He mentions the local newspaper Trudova Slava” whose Chief Editor Valery Horobets, member of the board of the National Journalists’ Union is not afraid to mark such material as political advertising. However in most district newspapers in the Kherson regions one doesn’t see this. At district level it all depends on the editor’s strength of will.

Roman Kabachiy asks whether it is not only the district authorities, but also political parties that put pressure on editors. Dementiy Bily says that certainly political parties don’t want to use signs indicating that something is political advertising since that makes people wary.

He believes that the majority of readers do not realize that they are being fed political advertising and that most people trust the printed word.

With regard to TV, Dementiy says that their CVU branch began monitoring the situation two weeks ago, analyzing local TV programmes, as well as newspapers. “Local television doesn’t ever show anyone without money”.  They sometimes show CVU events, but that depends since CVU on principle will not pay. When they invite television channels to their events they don’t generally come.  Unless there’s some member of the local authorities, or if according to the Party of the Regions plan they need a feature about “honest elections”.

In Kherson and the second largest city in the oblast Nova Kakhovka, there are some newspapers, he says, that have editorial policy. However the absolute majority of regional media publications are under municipal ownership or under the City Council.  Most of them bring their issues to be checked before publication to the district administration.

Summing up, he says that the majority of journalists at local level are not in fact journalists, but employees of the district administrations. Others are caught by the need to earn money. Not one newspaper has a magnate behind it providing funding. The only choice they have is whether they mark material as advertising or don’t.

Three regional newspapers can afford to criticize the authorities but over specific cases. They are capable of taking a balanced position. Since the public are critical of the authorities themselves, they welcome such criticism.

From the interview at IMI