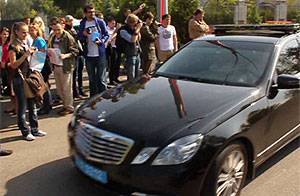 On 24 August well-known journalist and parliamentary candidate Tetyana Chornovol got inside the vast estate of Mezhyhirya, President Yanukovych’s residence, after which contact was lost. A colleague, Osman Pashayev informed of this in his blog on Ukrainska Pravda. He explained that Chornovo had asked him to warn colleagues if contact was broken.

Tetyana Chornovil informed him of her plan to get into Mezhyhirya at 12.55. Her main message was that he should not cordon himself off through fences, and that if one got through, so could 100 thousand.  She reported that she had got into the grounds without difficulty, then that she had managed to film a lot.  Then contact got cut off at 16.54.

At around 18.40 Chornovol got in touch, reporting that she had been detained by the Mezhyhirya security guards who handed her over to the Vyzhhorod Police Station. She said that she had managed to retain the photos taken and pass them to somebody.

At 19.30 Telekritika were finally able to get in contact with the journalist who said that she had not yet been fully released, but was hoping to be. After that the police have three days to open a criminal case. She said that she doesn’t know on what charge – it could be entering private property, or a place under special regime – or resisting police officers. “They took my phone and video camera away, of course I resisted”. All of the material on the equipment was removed, however she had managed to send some photos through the Internet.

On Friday evening, Ms Chornovil was still at the police station together with journalists who had come to show support.

As reported, on 1 August well-known journalist TV journalist Natalya Sokolenko and Tetyana Chornovil were detained outside Mezhyhirya.  Tetyana Chornovil who is also a parliamentary candidate for single-mandate electoral district No. 120 in the Lviv oblast (from the United Opposition) was charged with petty hooliganism, and Natalya Sokolenko was treated as a witness.  Opposite the entrance to Mezhyhirya  Tetyana Chornovil had written the words: “Yanukovych, language is your sentence. Don’t sign!”  [The words refer to the highly controversial language bill which significantly increases the role of the Russian language, and which Yanukovych signed into law a few days later).

The charge was under Article 173 “petty hooliganism”, which is in fact about using obscene language or immoral behaviour. Fortunately the Vyshhorod District Court did not find any administrative offence in the journalist’s action.

Despite promises made back in June 2010, President Yanukovych has not allowed any but a carefully selected group of journalists to see the reportedly sumptuous residence at Mezhyhirya.