BeslanTruth about Beslan blockedRemember BeslanMothers of Beslan seek answers through StrasbourgBeslan: Russia finally forced to answer before the European Court of Human RightsCourt in Strasbourg accepts case against Russia over BeslanBeslan: 11 years without answersBeslan: No Answers, Only Prosecution of Slain Victims’ Mothers Who Dared to ProtestRussia found in violation of the right to life over Beslan School attack14 years of pain and of lies about the siege and storming of School No. 1 in BeslanBeslan: In Memory and MourningBeslan Six years on100 lessons on BeslanRemembering BeslanOn the Fifth anniversary of BeslanFamilies of BeslanBeslan: four years and no answersCriminal investigation initiated against members of “Voice of Beslan”“Voice of Beslan” will not be silenced«Voice of Beslan: Only the truth»
• Topics / News from the CIS countries 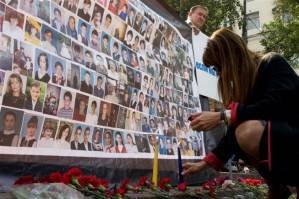 Eight years have passed since the terrorist seizure of School No. 1 in Beslan and the inept – or worse – actions by the Russian federal authorities which resulted in the storming of the school at 13.05 on 3 September 2004.  As a result of that storm, in which tanks and hard artillery were used, 331 people died, over half of them children.

On 1 September, during the “First Bell”, the festive event to mark the youngest children’s very first day at school, more than 40 armed terrorists burst into the school.

More than 1100 people were taken hostage, including 770 children.  This was one of the first of many lies told by Putin’s government who consistently gave a figure much lower.

The Kremlin also claimed that the terrorists had refused to negotiate which was not true but angered the terrorists who retaliated by refusing to give the children water.

The storming of the school happened after explosions were heard, apparently from within. In fact, an independent investigation by explosives expert Yury Savelyev suggested that the explosion which apparently triggered off the storm and ensuing chaos and carnage did not come from within the school.

Andrei Soldatov from Agentura.ru writes that the terrorists had agreed to negotiate with the Presidents of Ingushetia and North Osetia, as well as with the well-known children’s doctor Leonid Roshal.  They did not want to talk to journalists, since they said they might be FSB [Security Service] informers, but would have been prepared to speak with Anna Politkovskaya.  She set off that very first day to North Ossetia, but was poisoned in the plane and ended up in hospital.  Soldatov notes that the results of her medical tests disappeared from the clinic strengthening the suspicion that the FSB were implicated in her poisoning.

Savelyev’s report in 2006 raised very serious questions.  Or at least, gave possible, and very disturbing, answers to them. He concluded that the authorities decided to storm the school building, but wanted to create the impression they were acting in response to actions taken by the terrorists.

The number of questions that remain unanswered is great.  There is clearly no wish by the authorities to carry out full investigation, nor pressure from the West.