Ban on Lutsenko’s correspondence a flagrant violation of the law 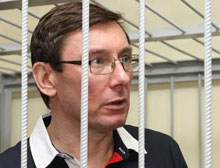 The administration of the Mensk Corrective Colony where Yury Lutsenko, former Interior Minister and opposition leader is being held, has banned Mr Lutsneko from passing letters to the outside world.

According to Yevhen Zakharov, Head of the Board of the Ukrainian Helsinki Human Rights Union, this is a flagrant violation and the authorities have no right to prohibit any person from corresponding with others. He says that previously there were limts on the number of letters depending on the type of regime a person was sentenced to, but that restriction was removed.  Censorship has remained since the law states that prisoners’ correspondence is subject to scrutiny.  Mr Zakharov explains that in each colony there is a person responsible for reading letters to check fo information which the administration considers should not be sent outside the colony. “These are preventive measures aimed at preventing possible crimes. If the censor does not see anything unlawful and the letter does not incite people to anything, it’s sent by post”

Mr Zakharov said that he thinks Lutsenko is protesting that his correspondence is checked. Furthermore, he cannot pass to the outside worl works, i.e. large manuscripts that the censor cannot look over.

He stresses that the management of the colony has no right to not pass on letters.