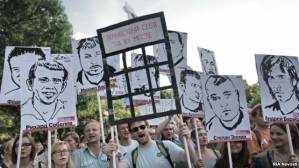 A concert was held in St Petersburg on Sunday evening in support of Taisa Osipova, wife of a political activist, the imprisoned members of Pussy Riot and those detained after the demonstration in March on Bolotnaya Square.

The concert was opened by the lawyers representing the three members of Pussy Riot. They thanked those taking part in the concert, and reminded them of other political prisoners.  The audience responded by chanting Free Political Prisoners!

Those who appeared without taking any fee included Yury Shevchuk with the group DDT; Gleb Samoilov, the group Televisor, Electric Partisans and others.

In a video clip which can be seen here http://youtube.com/watch?feature=player_embedded&v=Ke1OXbJwFlo Yury Shevchuk explains that he insisted that the concert should be called for political prisoners, not only Pussy Riot.  “First of all, Taisa Osipova who got 8 years and whom, many say, they most likely planted drugs on. They’re imprisoning people for politics. Friends, we’re against political repression, because you have to see further than your own nose”.

Tickets to the concert cost 600 roubles, with the money collected to help the families of political prisoners.