TVi disappears in yet another cityElectoral FoulIndependent TV station under increasing threatUkrainians defy court bans to defend TViDefend Freedom of Speech!Stop the Destruction of Freedom of Speech in Ukraine!TVi journalists turn to the Ukrainian public and international bodiesTVi demands that the Prosecutor take measures against TriolanTVi accuses Broadcasting Council over removal from cable networksAccess denied to independent TVi in DonetskKnyazhytsky invites regional channels to broadcast beleaguered TVi material for freeBroadcasting Council keeps out of “conflict” between TVi and TriolanBroadcasting Council denies role in removal of TVi from Triolan networkFreedom of speech in Ukraine: journalists are forced to keep silentSetbacks to media freedom in run-up to electionsTVi removed from cable networks in 11 citiesUkraine: The authorities should stop harassing independent television channel TViFront Line Defenders on the measures against TVi and Mykola KnyazhytskyCriminal proceedings against another independent media publicationChief Editor of LB.ua leaves Ukraine over threat of criminal proceedings
• Topics / Freedom of expression 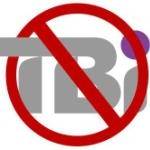 The Central Economics and Investment Department of the Kyiv State Administration has applied a penalty on the company behind the beleaguered TV channel TVi supposedly over a debt of 2 thousand USD.  The company can now only organize licensing of foreign economic activities by each time obtaining separate permission from the Ministry of the Economy.

“This means that if we wish to undertake any agreement or action with foreign partners, for example, paying for a satellite signal or for technology, we have to get a permit from the Ministry of the Economy.”, Artem Shevchenko, a presenter on the channel explains.

The document, which another presenter from the channel Mustafa Nayem has posted on his facebook page, states that the penalty has been imposed from 4 September over an infringement of the Law on Foreign Economic Activities and normative acts linked with this, for a debt amounting to 2 thousand USD.

Mustafa Nayem says that the penalty refers to a debt to the company Associated Press Television News which has long been repaid.

As reported here, TVi, effectively the last independent TV channel in Ukraine which broadcasts criticism of the government, and gives the opposition a chance to be heard, has been under siege for a number of months now.  The actions of the Tax Administration, as well as the fact that the channel has been removed from a very large number of cable TV packages throughout the country, has led to protests within Ukraine, and expressions of concern at such an assault on freedom of speech both within Ukraine and from the international community. 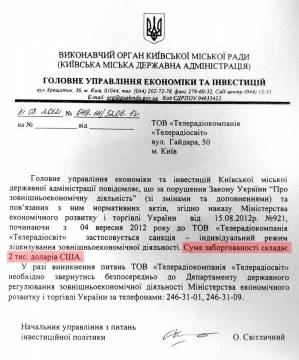