TVi loses appeal over tax caseTVi prohibited from contracting foreign agreements without official permissionTVi disappears in yet another cityElectoral FoulIndependent TV station under increasing threatUkrainians defy court bans to defend TViDefend Freedom of Speech!Stop the Destruction of Freedom of Speech in Ukraine!TVi journalists turn to the Ukrainian public and international bodiesTVi demands that the Prosecutor take measures against TriolanTVi accuses Broadcasting Council over removal from cable networksAccess denied to independent TVi in DonetskKnyazhytsky invites regional channels to broadcast beleaguered TVi material for freeBroadcasting Council keeps out of “conflict” between TVi and TriolanBroadcasting Council denies role in removal of TVi from Triolan networkFreedom of speech in Ukraine: journalists are forced to keep silentSetbacks to media freedom in run-up to electionsTVi removed from cable networks in 11 citiesUkraine: The authorities should stop harassing independent television channel TViFront Line Defenders on the measures against TVi and Mykola Knyazhytsky
• Topics / Freedom of expression 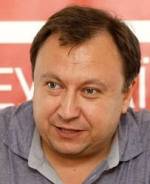 According to Mykola Knyzhytsky, TVi General Director, the Minister of the Economy, Petro Poroshenko has cancelled the sanctions announced on Wednesday against the beleaguered independent TV channel TVi.  The information has not been confirmed or denied by the Ministry.

As reported, the Kyiv State Administration had issued penalties over an allegedly outstanding debt of 2 thousand USD which meant that the channel could only pay any bills in foreign currency by each time obtaining separate permission from the Ministry of the Economy.

The well-known journalist and presenter of a programme on TVi, Mustafa Nayem reported the move on Wednesday saying that the penalty referred to a debt to the company Associated Press Television News which has long been repaid.