Russian FSB uses total isolation to torture and try to break abducted Kherson woman The KHPG receives half of Memorial’s Nobel, and will give the money to the victims of Russia’s invasion of UkraineUkrainian writer and civic activist abducted and tortured for Russian propaganda video Russia’s use of ‘evacuated’ Kherson residents as human shields is a war crime Zelensky urged to veto law that puts Ukraine on track for more damning European Court judgments Mariupol, an Example of GenocideInformation about Russia’s war crimes is now available in seven languagesAmnesty International’s 4 August statement. A response by the “Tribunal for Putin” initiativeDirector of Amnesty International in Ukraine resigns in protest calling controversial Amnesty press release "a tool of Russian propaganda’ Russian horrific castration of Ukrainian POW was about terror and preventing own soldiers from surrendering European Court orders Russia not to carry out ‘death sentence’ against POW defending Ukraine Summary of the events that occurred in Kherson city and Kherson oblast during the 90 days of the full-scale Russian-Ukrainian war (February 24 – May 24 2022)On documenting international crimes committed by the Russian occupiersPosition of the participants of the CivilMPlus platform on EU assistance to UkraineUkraine Should Ratife The Rome Statute Of ICC — Euromaidan SOS appealGlobal Initiative ‘Breaking the Vicious Circle of Russia’s Impunity for Its War Crimes’ (also known as ‘Tribunal for Putin’)‘International institutions must protect Ukrainians from abductions and executions’, Ukrainian SCOsSOS! Save the civilian population in Bucha, Irpin, Hostomel!Joint statement by UHHRU and KHPG on consequences of “recognition” of the self-proclaimed Donetsk and Luhansk People’s Republics by RussiaUkraine hammered by Court in Strasbourg for endless torture of life prisoners
• Topics / Dissidents and their time 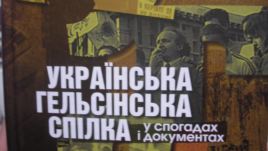 No one book received the overall award at the Publishers’ Forum in Lviv, however the panel of judges chose 18 which it considered the best books, and Radio Svoboda presented a special award to the publishers of “The Ukrainian Helsinki Union in reminiscences and documents” for preserving Ukraine’s national memory and covering its human rights activities.

The book follows the history of Ukraine’s becoming independent from the end of the 1980s. On over 800 pages more than 40 of the leaders of the Ukrainian Helsinki Union and participants in those events share their memories. They include Levko Lukyanenko (one of the founders of the original Ukrainian Helsinki Group in 1976 – translator); Mykhailo and Bohdan Horyn; Oles Shevchenko.  There are also dozens of secret KGB documents published for the first time, and unique photos. On one of them Viacheslav Chornovil is reading the declaration of the Ukrainian Helsinki Union [UHU].

UHU was a social, political and human rights organization, whose creation was announced at a 50-thousand strong rally in Lviv on 7 July 1988.  The significance of this event for the future course of history was epoch-making. The UHU emerged as a federal association of self-governing human rights groups and organizations in the regions, districts and cities of Ukraine and beyond. Unlike the Ukrainian Helsinki Group which was made up of a core of human rights defenders prepared to sacrifice themselves, the UHU which arose on the basis of the UHG became the first mass opposition organization in the Soviet Union which served to activate the public and had its own political program, entitled the “UHU Declaration of Principles”.

The restoration of Ukrainian statehood as safeguard for all the rights of the Ukrainian people;

Full abolition of the Stalin – Brezhnev constitutions, the safeguarding of rights and freedoms according to international conventions, the retention at the union level of only consultative – coordination bodies and the transfer to sovereign republics of all control over economic, political and cultural life.

The provision of guarantees of cultural and national autonomy for national minorities.. The restoration within Ukraine of a Crimean autonomous republic with the organized return of the deported Crimean Tatar people;

The establishment of diplomatic relations with other countries on the level of embassies and consulates, mutual representation of agencies of mass information and the independent representation of Ukraine at international conferences, sporting events and competitions and at artistic festivals;

The transfer of real power in the republic from the Communist Party to councils of deputies elected on an alternative basis, for not more than two terms, the right to put forward candidates should be held by all parties, unions, informal associations and initiative groups;

A market economy and free price-fixing; encouragement of private initiative, the reformation of a part of state industrial enterprises into share-holding or cooperative ventures;

The voluntary departure of people from collective farms with mandatory provision of land for them;

The establishment of a minimum subsistence level, state assistance for the unemployed and incentives for charitable activities;

Reduction of government structures, the abolition of all without exception privileges for those belonging to the Party and Soviet bureaucratic apparatus;

The termination of construction of new atomic power stations, the phasing out of those already functioning and their replacement with alternative sources, the suspension of export of electricity. Nationwide debate on major projects of industrial construction;

The safeguarding of freedom of speech, the right to form independent civic organizations and media outlets, the right to hold rallies, gatherings and demonstrations, free access to information, including to archives, to all normative acts, diplomatic documents, and books kept in the special archives;

The principles of the UHU declaration were reflected in the Declaration of State Sovereignty of Ukraine, adopted by the Verkhovna Rada two years later on 16 August 1990.

The authorities treated the creation of the UHU as a challenge to the Soviet state. The governing Party bodies, KGB and police directed their efforts to countering the newly-emerged and daring opposition, using official and unofficial warnings, intimidation, detentions, administrative arrest, campaigns to discredit and of disinformation in the Party press.

However the UHU’s authority only increased as a result. It began to make international contacts and under its influence the Popular Movement of Ukraine [RUKH] became more radical, this making it possible for national democratic forces at the elections to the Verkhovna Rada in March of 1990 to gain a full victory in Kyiv and western regions of Ukraine. 12 members of the UHU became State Deputies, and hundreds – deputies of local councils.

The founding congress of the UHU where 500 delegates represented 2, 300 UHU members from all regions, took place in Kyiv from 29-30 April 1990. It decided to transform the UHU which was effectively a pre-party into a political organization – the Ukrainian Republican Party, with Levko Lukyanenko elected leader.  Those members who were more concerned with human rights issues created other human rights movements.

The book has been compiled by one of the members of UHU – Oles Shevchenko, and there is a fair amount of information in people’s accounts about passing information about its activities to Radio Svoboda.  The latter’s award was therefore particularly appreciated, as the Chief Editor of the publishing house Yaroslav Val, Pavlo Shchyryts stressed.  “The Ukrainian Helsinki Union is what the younger and next generations should be brought up on in order to understand who they are”, he said.  He added that it was an award for Oles Shevchenko and Yevhen Sversyuk who had created the work and Mykailo Slaboshlystsky who published it.