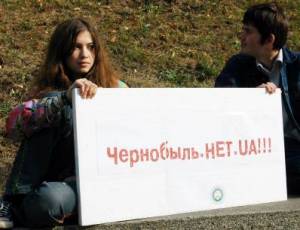 The Environmental-Humanitarian Organization Zeleny Svit has expressed its support for the civic campaign against infringements of legislation in the adoption of a law which allows the construction of two new nuclear reactors at the Khmelnytski Nuclear Power Plant.  It has sent a number of appeals and information requests, including to the President, the Speaker of the Verkhovna Rada, the Environment Ministry, the management of Energoatom and others.

As reported, Greenpeace and Bankwatch have also addressed an open letter to President Yanukovych urging him to veto the law. They express concern that Europeans have been deprived the right enshrined in the Espoo Convention to full participation in discussion of this dangerous project.

They point out that consultation with neighbouring countries in accordance with Espoo procedure had not ended when the Verkhovna Rada on 6 September adopted Law No. 11088 on Reactors 3 and 4, Iryna Holovko, spokesperson for Bankwatch in Ukraine explains. “The President can still stop such a flagrant violation by Ukraine of its international commitments if he does not sign this law”.

The draft law has also  not undergone a State environmental impact assessment.  The statement from Greenpeace and Bankwatch called this a negligent attitude to the planning and risk assessment of nuclear energy plans and entirely unacceptable.