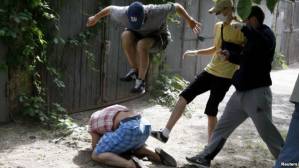 Vicious attack on a gay activist earlier this year

Having put criminalization of libel on hold, Ukrainian MPs on 2 October passed in its first reading a draft law prohibiting what they call “promotion of homosexuality”

The bill is entitled “On amendments to some legislative acts on protecting children’s right to a safe information realm, but is in fact against what it sees as promoting a positive attitude to people who are gay.  The explanatory note claims that the “spread of homosexuality” is a threat to national security, mentioning AIDS/HIV and asserting that it threatens the family and could supposedly cause a demographic crisis.

The bill received 289 votes.  If passed in its present form, what MPs consider “promotion of homosexuality” could carry a prison sentence.

In November 2011, the Ukrainian Helsinki Human Rights Union issued an open letter to the Speaker of Parliament and chairs of various parliamentary committees expressing concern over the potential consequences of the adoption of this draft law.

It would undoubtedly clash with other legislative norms based on modern ideas and standards.

The draft contains terms which are not defined with sufficient certainty to be able to apply the regulations to the circulation of any information or any discussion which mentions or concerns homosexuality. This, UHHRU points out, infringes Article 34 of the Constitution which clearly states that everyone is guaranteed the right to freedom of thought and speech, and to the free expression of his or her views and beliefs. Everyone has the right to freely collect, store, use and disseminate information by oral, written or other means of his or her choice.

Adoption of the law would also cause unwarranted restriction of the right to peaceful assembly since any picket, rally etc aimed, for example, at defending gay rights, etc, could be qualified as “propaganda of homosexuality”.

Its adoption would also lead to a disproportionate and discriminatory restrict of the right to freedom of thought and speech for one group in society, this being in breach of Article 24 of the Constitution.