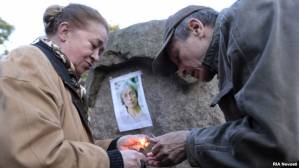 On the 6th anniversary of the murder of Anna Politkovskaya, rallies and remembrance gatherings have taken place in many parts of the world.  A rally in Moscow was attended by around 200 people.  They called on the authorities to find the killers of Anna Politkovskaya and other journalists and human rights defenders murdered in the Russian Federation.  The photo above is from a meeting in St Petersburg.