One year on, still imprisoned for defending himselfSelf-Defence is No Offence!It’s criminals who should be in prison, not their victims!Nigerian held in detention for 6 months after being attackedTwo suspects in Luhansk racist attack caught in RussiaAlleged organizer of Luhansk attack on foreign students released from custodyLuhansk: Continuing run-ins between local residents and foreign nationalsLuhansk: Masked gang beat up foreign studentsQuestionable “witness” in the Olaola Femi trialPeaceful protest in support of imprisoned Nigerian student stoppedProsecutor accused of corruption over Olaolu Femi case17 months on Olaolu Femi trial delayed for want of an interpreterOlaolu Femi finally released from custodyOlaolu Femi’s surreal difficulties continueOlaolu Femi: Suspended sentence for defending himself
• Topics / The right to liberty and security 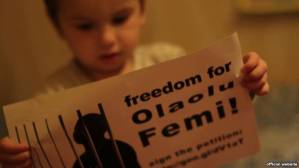 Protest to mark a year since Olaola Femi was arrested in Luhansk.  The photo is from the facebook page (http://facebook.com/FreeOlaolu)

There is still no resolution in the case of Nigerian student Olaola Femi who has been held in custody for over a year now, despite public concern and statements from the Prosecutor General and the Human Rights Ombudsperson that they were taking the case under their control.

Arkady Bushchenko, Executive Director of the Ukrainian Helsinki Human Rights Union says that the case looks like an attempt to scare foreigners, especially people from Arab or African countries. It’s not enough that neither the State nor the police defend them, he says. Now they’re preventing them from defending themselves. “This is a real message which frees the hands of racists, skinheads or other gangs. Or just idiots who don’t like foreigners.”

In August the Human Rights Ombudsperson Valeria Lutkovska and Prosecutor General Viktor Pshonka stated that they were taking the case under their personal control.

The Luhansk Regional Prosecutor’s Office asserts that no violations were found during the criminal investigation.  Radio Svoboda also quotes an Interior Ministry spokesperson, V. Starchenko as saying that it is the court which must decide. If it finds no infringements they will not carry out any further checks.

Oleh Levytsky, UHHRU lawyer says that if Olaola Femi is found guilty, then the case will need to be taken to the European Court of Human Rights. He points out that there was a similar case in 2008 in Kyiv when the victim of an attack, also from an African country, was “turned into” the assailant. Then the case was closed, however Oleh Levytsky says that if necessary he will revive it, issuing a suit against the claimant who knifed the young man back then in the chest.  In that way both cases could end up in Strasbourg together.

A petition in support of Olaola Femi can be signed here