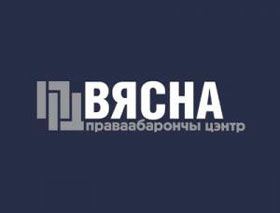 As feared, a Belarusian court has issued an order for the confiscation of the Viasna Human Rights Centre’s office which is being treated as the private property of the Centre’s imprisoned director, Ales Bialiatski.  Bialiatski’s wife (and by law co-owner of the flat) Natalia Pinchuk  was informed on 17 November that the confiscation is scheduled for 26 November.

This new assault on the organization is no surprise. The original court order was passed on 4 July and sent to the penal colony where Bialiatski is being held.  In November 2011 49-year-old Ales Bialiatski, Head of the Viasna Human Rights Centre and Vice-Director of the International Federation for Human Rights, was convicted in connection with accounts opened and used to transfer money from abroad to Belarus to help victims of political repression, since Viasna was officially dissolved by the Belarusian regime in 2003.

There was outrage and consternation when it was discovered that both the Lithuanian Justice Ministry and the Polish Prosecutor General’s Office gave information about accounts to the Belarusian authorities.

There has been widespread condemnation from democratic countries and NGOs of Ales Bialiatski conviction. In December leading Belarusian human rights organizations named Ales Bialiatski Human Rights Defender of the Year, and he has been nominated by the Slovak Prime Minister for the 2012 Nobel Peace Prize.

The Viasna staff are adamant that this may complicate their work, but will not stop it.