RuNet: Russia on the Chinese road? 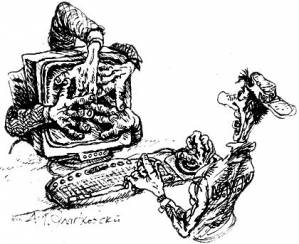 A new internet law came into effect in Russia this month. Ostensibly designed to tackle extremist websites, the list of banned sites has already cast a much broader net. Things are likely to get even worse, says Irina Borogan.

On November 12, an internet encyclopaedia Lurkmore.to became the first victim of a new Russian law on control of the internet. The site in question frequently uses unprintable language; it gives definitions which contradict each other and could be considered coarse, even offensive. But it nonetheless enjoys considerable popularity in RuNet and is considered a part of the internet sub-culture.

Lurkmore was put on the Register of Banned Sites at the suggestion of the Federal Drug Control Agency (FDCA), which reasoned that the encyclopaedia contained information promoting drugs. The opinion of the FDCA is sufficient to get a domain name or URL blacklisted. On 13 November, when the website administrators took down two articles about marijuana, and when FDCA had been engulfed in a tidal wave of telephone calls from journalists, Lurkmore was taken back off the Register. A small u-turn which does not, in fact, alter the sense that we are living in a new internet reality in Russia.

'For more than 5 years regional prosecutors have been requiring providers to block sites which have been banned by the courts.'

This is not the first time that Russia has faced censorship in the internet. For more than 5 years regional prosecutors have been requiring providers to block sites which have been banned by the courts. Up until recently sites were blocked if they were on the Federal List of Extremist Materials which contains 1520 books, articles and even social networking messages. First on the List is 'White Music', the album of the Omsk rock-group Order, and the last is the book 'Yids' by an unknown author, but there are also works of history, philosophy and art, and films too.

Recently this list has been filling up extremely fast. In March of this year, for instance, the Orenburg District Court declared 65 books and articles to be extremist in one swoop: these are mainly Islamic literature, including the books of Fetullah Gulen, preacher and founder of a popular movement, who was exiled from Turkey. Why so many and why the district court? No need to search for conspiracy explanations, because all this literature was removed during a police search of an Orenburg flat, whose owner was found guilty of setting up an extremist cell.

Despite the list, the blocking of banned materials has hitherto been fairly random, so that a site blocked in the Tver Oblast remained completely accessible in neighbouring Vladimir Oblast. The new Register of Banned Sites, which went into operation on 1 November, deals with that problem. According to the new law,  Roskomnadzor (the Federal Service for the Monitoring of Telecoms, IT and Mass Communications) oversees the Register, listing banned sites on the basis of information received from the Interior Ministry, the FDCA and the Federal Consumer Rights Protection Service, and also at the request of the courts.

The Register is accessible on the internet (zapret-info.gov.ru, in Russian) and both providers and operators are obliged to keep up to date with it, blocking access to sites or webpages that have been blacklisted. Any provider who doesn't keep up to speed on this can lose his licence.

'The Register is accessible on the internet (zapret-info.gov.ru, in Russian) and both providers and operators are obliged to keep up to date with it, blocking access to sites or webpages that have been blacklisted.'

Over the course of nearly three weeks, more than 591 sites have been listed, including Lurkmore. The listing process will almost certainly gather speed, because the 1500 books, articles etc listed on the Federal List will have to be put on the Register.

It was recently discovered that Duma deputies are planning to ban anonymisers (proxy servers), which allow an internet user access to banned sites without revealing his or her identity. In September Sergei Zheleznyak, Deputy Speaker of the Duma and one of the authors of the law which compels all NGOs funded from foreign sources to register as foreign agents, suggested banning the use of anonymisers in Russia and fining anyone who broke the law. Deputies apparently consider that only miscreants, hackers and paedophiles need anonymisers.

Obviously, that is not true. Indeed, three years ago a government commission on federal communications themselves investigated the use of proxy servers by Russian officials.  These officials were concerned that internet browsers recorded what sites they were visiting and passed this information on to the analytical centres of such search engines as Google. These data are then used to analyse the internet user's activity, to coordinate the official's IP address at the work with his home address and identify his interests, circle of contacts, weaknesses and social status. The development of a Russian proxy server was mooted to protect the officials' internet identity. As far as we know, however, the idea of a special proxy server never took off: it was decided that the officials should use dynamic IP addresses, which would enable each public official to conceal his interests.

'Duma deputies are planning to ban anonymisers (proxy servers), which allow an internet user access to banned sites without revealing his or her identity.'

Until now anonymisers have been most in demand among office workers who are banned from using social networks during office hours, or users who for one reason or another have had their access blocked to such sites asOdnoklassniki [Friends Reunited equivalent] or Vkontakte [VK, European social network not unlike facebook]. A typical advertisement for an anonymiser runs something like 'Dissembling at work? Some imbecile sysadmin blocking your access to social networks?  We can help.'

The new government internet policy will significantly increase the use of proxy servers. It won't only be political activists trying to avoid identification and persecution by the authorities who will need anonymisers, because students and researchers won't be able to use the internet to look for material they need for their academic work. Hitler's Mein Kampf is banned in Russia and access to it has been blocked recently, as it has to the works of the Muslim cleric Said Noursi.

The situation is deteriorating every day. That enthralling historical fake The Protocols of the Elders of Zion,  which was the basis for Umberto Eco's bestsellerThe Prague Cemetery,  has just been banned, as has the documentary bookabout British football fans Among the Thugs by Bill Buford.

Anonymisers are already being used by journalists covering the battle with terrorism in the North Caucasus. They use them to gain access to the militants' sites, which post statements by the underground leaders and informative videos. Even ordinary internet users interested in politics make use of proxy servers if, for instance, they want to see the film The Innocence of Muslims, which is banned in Russia and has caused a furore all over the world.

'On top of all this, the provider community is discussing a possible ban on encryption protocols such as https, essential for access to facebook and postal services such as gmail.'

On top of all this, the provider community is discussing a possible ban on encryption protocols such as https, essential for access to facebook and postal services such as gmail. Technically, this is quite feasible: Pakistan took this route last year, banning the use of any encryption protocols.

For many years the Russian authorities refused to adopt the same internet policies as the Chinese, making it clear to the world community that they accepted certain limitations on their attacks on the freedom of speech. Now they are have taken the Chinese route they are demonstrating that these limitations no longer exist.