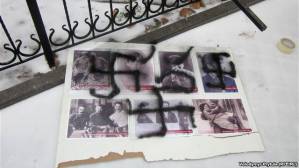 A group of Crimean Tatars led by members of the Mejlis of the Crimean Tatar People have destroyed an exhibition to the Soviet dictator, Joseph Stalin. They were outraged at the glorification of a man who in Ukraine has been officially declared guilty of millions of deaths as a result of Holodomor 1932-1933 and who also personally ordered the Deportation of the Crimean Tatars in 1944.  The organizers of the exhibition assert that they only wanted “an objective picture of the historical figure and head of a great country”.

The exhibition marking the 133rd anniversary of the dictator’s birth, which was brought from Russia, was mounted by people calling themselves members of the Russian civic organization “Sut Vremeni” [Essence of the Time] and its Crimean branch.

It shows photos of the dictator himself, as well as of foreign political figures with quotes praising Stalin and official pictures of Stalin’s Terror. The organizers also handed out leaflets calling on people “to get a grip of history and pay due to such a major historical figure as Stalin.”

The organization is a Russian leftwing nationalist movement, founded by Sergei Kurginyan which seeks to merge communist, nationalist and Russian Orthodox ideas for reviving the USSR.

Desultory discussion between a few journalists and the organizers of the exhibition was interrupted by a group of Simferopol people, including the Head of the Mejlis Secretariat Zair Smerdlyaev and the Head of the Mejlis Foreign Relations Department, Ali Khamzin official. They called on the organizers to take the exhibition away on the grounds that in Ukraine Stalin has been declared guilty of organizing Holodomor and the death of millions.  He also issued the order to deport the Crimean Tatars which has been declared a crime too.

“They are trying here to promote a tyrant which destroyed almost half the Crimean Tatar people. Over 46 percent of Crimean Tatars died during the forced move and in the first years of the Deportation. We should all, citizens of different nationalities, unite in preventing propaganda of Hitler and Stalin!”, Zair Smedlyaev said.

After the organizers refused to dismantle the exhibition, the Mejlis activists threw the stands with the quotations and images of Stalin, with some of those present also taking part in the dismantling.  Somebody used a paint canister to draw something similar to a swastika. They said that for them Hitler and Stalin were the same.

Ali Khamzin told Radio Svoboda that they were amazed at the passiveness of the local and central authorities in the face of foreign structures glorifying a dictator responsible for the deaths of millions in Central and Eastern Europe and Asia.

The police were present  but did not intervene. Radio Svoboda says that the local authorities refused to comment as to why they had not attempted to ban an exhibition which is profoundly offensive to many and incites inter-ethnic conflict.