End Impunity for violence against journalists!Police beat up journalist and civic activistLawyer dismisses traffic police ban on filming themHundreds die each year due to traffic police corruptionFighting corruption: fine words and hard-hitting reportsFreedom of Speech rating also slumpsKharkiv journalist reports threatsCriminal investigation over threats to Kerch journalistKerch authorities accused of pressure on local mediaAnti-corruption journalist seeking interview with Kerch mayor detainedKerch journalists call for solidarity in the face of concentrated measures against them“He lay on the sidewalk, naming towns and cities in Ukraine”. A digest of anti-war activities in Russia, 23-29 JulyPatterns of Resistance are changing. A Digest of Protests in Russia (17-24 June 2022) Crimean Solidarity Coordinator re-imprisoned for video posted two years before Russia annexed Crimea Former US Ambassador demolishes Russia's narrative about imprisoned Crimean Tatar journalist Remzi BekirovRussia claims that by naming its political prisoners, Memorial is ‘justifying terrorism’ Zelensky fails crucial test for restoring justice in Ukraine Russia did not invade Crimea in new school textbooks edited by Putin adviser A brief description of the KHPG strategic litigations in the first half of 2021Russian-occupied Crimea and Donbas close to North Korea in Freedom House rating
• Topics / Freedom of expression 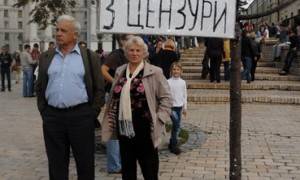 The banner in full reads Hitler began with censorship

The civic movement Stop Censorship and a number of prominent media organizations have reported that 2012 was the worst year in the last decade for violations of journalists’ rights.

In a joint statement they note that there were 80 cases of aggressive treatment of journalists (attacks, use of physical force); 18 cases involving threats; and almost 300 cases of infringements and various forms of pressure on journalists (against 37 cases of aggressive treatment and around 100 infringements).  This means, they write, that the number has tripled in the past year and is considerably higher than the previous record of around 200 infringements in 2004.

In 2012 six cases were initiated under Article 171 of the Criminal Code – obstruction of journalists carrying out their work.  This was a record for all the years of Independence, however on average the culprits were held to answer in one in twenty attacks on journalists  Impunity for attacks on journalists was the main reason for the increase in physical aggression in 2012.

They write that there is no progress in the Gongadze case and note that all court hearings in the trial of Oleksy Pukach, the former police general charged with carrying out the journalist’s murder have been behind closed doors. There is no movement on establishing who ordered the killing.

There were cases of direct political censorship linked with the President. On 26 October six editors from the private information agency UNIAN issued an open statement providing evidence that the management had banned any mention of the President in negative or critical context. During the year there was also an increase in the number of different forms of censorship, both in the national media, for example, the TV Channel Ukraina cut out a speech by Andriy Kulykov) and in the regional media (for example, on 9 August Olha Hodovenko and Olha Komarova resigned from the Mig TV Channel in the Odessa oblast due to censorship and not wanting to serve the Party of the Regions).

As evidence of censorship the authors cite the lack of pluralism of opinion in the Ukrainian press and on television; the huge number of important subjects which are embarrassing for the regime which are ignored by most channels. These are first of all subjects linked with politics – the fall in popularity of those in power and pro-Yanukovych parties; threats to freedom of speech; statements from high-ranking western, EU or European Parliament officials regarding the situation with democracy in Ukraine, etc.  The media also muffle socio-economic issues; the reduction in the standard of living; increase in tariffs; protests etc.

Following the elections the amount fell, but still remains 10 times higher than at the beginning of the year, while such commissioned material of an economic nature is 6 times higher. After the elections the level of observance of journalist standards rose considerably, however there remain problems with balance of opinion and providing all the facts.

2012 was also marked by the attempt to criminalize libel; an increase in solidarity within the journalist community; and open protests against censorship in regional and national media.

The authors note that one of the positive changes was the fact that journalist and civic organizations successfully carried out wide-scale campaigns, for example, against the adoption of the libel law.

While they note dialogue with the journalist community, training courses for law enforcement officers, roundtables and working group meetings as part of the Inter-Departmental Working Group on Freedom of Speech Issues, the President did not give a single press conference and journalists were not always admitted to events in which he was taking part.

2012 in general, they conclude, was marked by a sharp increase in physical aggression against journalists; a rise in censorship and the amount of commissioned material.

The joint statement is from Stop Censorship; the Institute for Mass Information; the National Union of Journalists; the Independent Media Trade Union; Telekritika; the Media Law Institute and Internews Ukraine with the support of Reporters without Borders