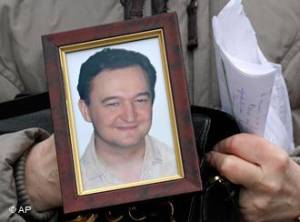 The trial, on charges of fraud began on Thursday of Sergei Magnitsky who died 3 years ago in a Russian SIZO [pre-trial detention centre] and William Browder, who was Mr Magnitsky’s boss.

It comes just over a month after the US House of Representatives passed the Sergei Mag­nit­sky Rule of Law Account­abil­ity Act which “cre­ates tar­geted sanc­tions for the offi­cials involved in the case of Sergei Mag­nit­sky as well as other gross human rights abuse in Russia.”

The lawyers representing the Magnitsky family refused to take part in the trial of a dead man, saying that this was unconstitutional.  The judge has now adjourned the preliminary court hearing to 20 January.

The same court is due to try Dmitry Kratov, former Deputy Head of the SIZO and the only person who has come near to being charged with Magnitsky’s death.  However the Prosecutor’s Office on Monday dropped their charges and asked the court to acquit Kratov.

All of this, together with a law prohibiting US citizens from adopting the huge number of Russian children in need of families, is seen by many as retaliation for the US move.

William Browder lives in the UK, and if the trial continues, it will be in his absence.

Sergei Magnitsky died in November 2009 after being held for 358 days in a pre-trial detention centre. He had been arrested after alleging systematic and large-scale corruption and theft from the Russian government sanctioned by officials. He died after having been refused adequate medical treatment, eight days before he would have had to be released or brought to trial.