Two Year Mockery of the Rule of LawApplication to release Lutsenko on health grounds rejectedCourt hearing or ploy to keep Lutsenko away from the public view?Relatives report that Lutsenko needs intestinal surgeryLutsenko may undergo surgeryAssociation Agreement without release of Tymoshenko & Lutsenko "unlikely"US urges release of Tymoshenko and LutsenkoLutsenko’s appeal rejectedLutsenko appeal ruling likely on ThursdayEuropean Court of Human Rights upholds ruling against Ukraine in Lutsenko caseLutsenko demands medical examination outside prisonLutsenko loses civil suit against prison administrationBan on Lutsenko’s correspondence a flagrant violation of the lawLutsenko’s life could be in danger in prison colonyU.S. Government Statement Regarding the Verdict in the Yuriy Lutsenko TrialLutsenko sentenced to another 2 years restriction of libertyStill no aggrieved party, but prosecution demands 2.5 years for LutsenkoThe Criminal Prosecution of Lutsenko and Investigative OperationsLutsenko trial: hearing postponed due to lack of officially aggrieved partyLutsenko trial: “Victim” doesn’t see himself as such and asks to be left alone
• Activities / Political persecution in modern Ukraine 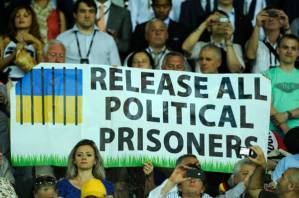 Ukraine is set to take over the presidency of the OSCE in January 2013. The country has said it wants to strengthen human rights during its term - while facing criticism for its own democratic credentials.

Walburga Habsburg Douglas was outraged after authorities denied her a meeting with former Ukrainian Prime Minster Yulia Tymoshenko, who is being treated for back problems at a hospital in Kharkiv in the eastern part of the country.

This, according to Douglas, Special Coordinatior for the Organization for Security and Co-operation in Europe (OSCE), "is a violation of human rights."

Opposition leader Tymoshenko was sentenced to seven years imprisonment in a trial that drew wide international criticism. As a result, she was unable to take part in parliamentary elections in late October, which the OSCE observer mission declared to be unfair and a "step backwards."

In early 2013, Ukraine is set to take over the presidency of the OSCE. The Kiev newspaper "Dserkalo tyschnja" wrote that allegations of a politically motivated judiciary and doubts about the fairness of parliamentary elections were the worst possible backdrop the the Ukrainian OSCE presidency.

Many experts share the newspaper’s opinion. "The presidency is implicitly loaded, " Wolfgang Zellner, head of the Center for OSCE Research (CORE) at the University of Hamburg, told DW. Susan Stewart at the Berlin-based German Institute for International and Security Affairs (SWP) also believes that Ukraine’s reputation has suffered in recent years because of human rights violations and backpedalling on democracy. "That’s why I think it will be difficult for Ukraine to exercise strong leadership, " Stewart said.

Ukraine is the second former Soviet republic to assume the OSCE presidency after Kazakhstan in 2010, which paved the way. But Kazakhstan was also criticized for human rights violations.

&#146Anxiety behind the scenes’

"Until a few years ago, it was customary in the OSCE to only choose those countries to take over the presidency that met a minimum set of human rights requirements, " Zellner said. But that tradition, he adds, is now over. Zellner admits that Ukraine is causing some "anxiety behind the scenes."

The OSCE could use strong leadership. The organization, which began life in the 1970s as the Conference on Security and Co-operation in Europe (CSCE), is battling a loss of significance.

The OSCE was created during the Cold War to serve as a forum for dialogue between the warring blocs in the East and West. Today, the Vienna-based organization unites 57 nations from Europe, Central Asia and North America. It fights terrorism, seeks to resolve conflicts and helps protect the environment. Observing human rights and fundamental freedoms is a key part of OSCE’s security concept.

But the organization hasn’t been overly successful, critics say. And old divisions threaten to paralyze its work altogether. Zellner views the "divergence in different directions" as the largest problem. "On the one side, you have the United States and the Western nations, barricaded behind human rights requirements, and on the other, Russia, which makes it difficult to know where cooperation is desired, " he said. Russia and other former Soviet republics accuse the OSCE of meddling in their internal affairs because of the organization’s criticism of their elections.

The Kiev government is trying to keep expectations low. Key priorities during its presidency include the protection of fundamental rights, securing energy and resolving conflicts, the Ukrainian Foreign Ministry said without providing any details.

’Too weak to achieve much’

Transnistria is one area where those ambitions could be put to the test. The conflict in Moldova’s breakaway province has been simmering for 20 years. The self-proclaimed republic declared its independence in 1992. As a neighbor, Ukraine has been involved in international talks on a solution.

Zellner doesn’t expect a breakthrough, though, "Even if Ukraine wanted to, its position is too weak to achieve anything alone, " he said, adding that he doubts "Russia is prepared to give Ukraine this success."

Some observers in Kiev believe the Ukrainian presidency could sink into the diplomatic routine. The presidency is mostly about maintaining relationships, organizing meetings or appointing heads of field missions such as the one in Kosovo, according to Zellner. And it has "nothing to do" with observing elections, he added.

Zellner is nevertheless optimistic about the Ukrainian presidency, pointing to Kazakhstan as an example. The country, he admits, may not be a democracy like those in the West but during the unrest in Kyrgyzstan, it was able to contribute to resolving the conflict.

"It’s all up to Ukraine, " Zellner said.