ECHR Judge: Laws “passed” with absentee MPs’ cards may be revoked in Strasbourg 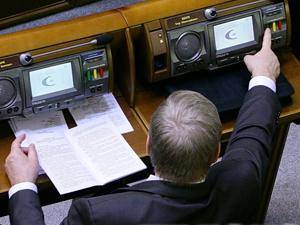 According to Stanislav Shevchuk, Acting Judge from Ukraine at the European Court of Human Rights, laws adopted using other MPs’ cards can be revoked by the European Court.  He points out that this is a clear violation of Ukraine’s Constitution which states that MPs must vote in person.

He says that the Court was fully entitled to deal with this in its consideration of the case of Volkov v. Ukraine.  As reported here, in a crucial judgement made public earlier this week, the Court found that the dismissal of Supreme Court Judge Oleksandr Volkov in 2010 by the High Court of Justice had involved four violations of the right to a fair trial (Article 6 of the European Convention on Human Rightsm and a violation of the right to respect for private and family life (Article 8).

The Court found, among other things, that the vote in Parliament on his dismissal had been unlawful.  The dismissal required a vote in favour by at least 226 MPs, and there had simply not been that many MPs physically present in parliament. “It’s all simply, that is totally within the European Court’s competence”, Mr Shevchuk said.

He said that the judgement was a signal to the authorities that it was time to reject the present system where a few party members simply push the button for absent colleagues, with some MPs virtually never setting foot in parliament.  “What the Ukrainian government should do immediately after the European Court judgement is to stop the voting by “pianists” (with hands stretching over many “octaves” or seats – translator) in parliament. That would be the most effective means of implementing the court judgement”, Shevchuk says.

He noted also that the Court’s revoking of the decision to dismiss Volkov could form a precedent for cancelling laws adopted with analogous violations. This, however, would depend on how well the lawyers deal with it, since in Volkov’s case it was clearly a personal decision.  With a law, it can be more complex.  He adds that it is the Constitutional Court of Ukraine which should concern itself with the constitutionality of laws.   What he does not mention is that over recent times this has become less and less the case, with a number of judgements from the Constitutional Court eliciting considerable criticism with the suggestion that they were made to suit those in power (translator).