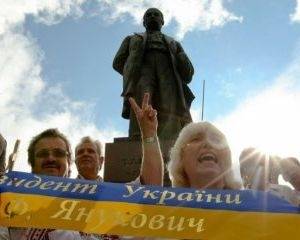 65-year-old Halyna Shvydka was jailed for 10 days after she cut the President’s name off a wreath to the poet Taras Shevchenko.

The opposition Batkivshchyna party’s press centre reports that the case of Halyna Shvydka is to be examined by the European Court of Human Rights.  As reported, on 24 August 2011 Ms Shvydka cut the President’s name off a ribbon on a wreath with the inscription “To Taras Shevchenko from Viktor Yanukovych”.

The application alleges unlawful arrest and violation of freedom of expression, liberty and of the right to a fair trial.  There is no information as to when the case will be considered.

The application was made to the ECHR in October 2011 after the Kyiv Court of Appeal upheld the ruling of the Shevchenkivsky District Court in Kyiv.  The latter had sentenced the 65-year-old pensioner to 10 days imprisonment for “spoiling the President’s personal property”.  The said “personal property” was a wreath placed at a monument to the Ukrainian poet Taras Shevchenko.   The court also found Ms Shvydka’s action to have demonstrated “flagrant, cynical contempt for society and morality”.

Halyna Shvydka insists that her action was a conscious protest against the policies of Viktor Yanukovych and the actions of the law enforcement bodies and that the punishment of 10 days imprisonment violated her freedom to express herself and constituted political persecution.