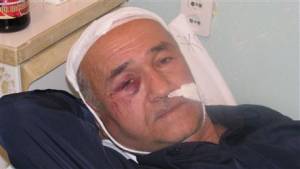 The attack took place on Thursday evening as Mr Abduplayev was returning home. He recounts that they attacked from behind, hitting him with a heavy object on the head and knocking him to the ground, after which they kicked him, aiming at the face.  No attempt was made to rummage in his pockets, his mobile telephone and wallet were not touched.  He was taken to hospital with serious injuries and concussion, and is now in the neurosurgical unit.  The Mejlis of the Crimean Tatar People see the assault as provocation against Crimean Tatars and an attempt to destabilize the inter-ethnic situation on the peninsula.

A criminal investigation is underway, with the Prosecutor’s Office saying that the attack is classified as “hooliganism”.

Kurtseyit Abduplayev was persecuted in Soviet times, as an activist of the Crimean Tatar national movement, and was arrested on many occasions.  Later, in 2004, he was accused of organizing clashes in a Simferopol bar and on the “Protest Clearing” in which several people were injured.  He was sentenced to 9 years imprisonment.  He asserted his innocence and the Mejlis stated that the prosecution was politically motivated.  After considerable public protest he was amnestied by President Yushchenko.

In an interview to Radio Svoboda, Kurtseyit Abduplayev refused to discuss whether the assault was linked with his civic position and work in the national movement, but said that he did not exclude the possibility that it was aimed at intimidating him and members of the Mejlis.

However, Ali Khamzin from the Mejlis believes the incident is the latest in a series of provocations against Crimean Tatars  since the end of last year – the destruction of the “Protest Clearing” in Molodizhne; the arson attack on the guard’s quarters at the place where the Soborna (Assembly) Mosque is to be built and the attempt to hold an exhibition glorifying Stalin.  He believes that these are attempts to provoke Crimean Tatars into using force, and to disrupt the organization of an International Forum on the Rights of the Crimean Tatar People in Ukraine.  This Forum, under the auspices of the OSCE, was initiated by the Mejlis.  It is planned to be called for the end of 2013, though there has still been no official consent from the Ukrainian authorities.

The Head of the Mejlis, Mustafa Dzhemiliev is less categorical. Although not excluding the possibility of such motives for the attack, he says that he is more inclined to see it as revenge by pro-Russian radicals with whom Kurtseyit Abduplayev has been in open conflict.  Both Mustafa Dzhemiliev and Ali Khamzin are convinced that the brutal attack on one of the representatives of the Kurultay poses a threat to inter-ethnic political stability in the Crimea.