EU issues new warning on selective justiceTymoshenko case to be raised at EU-Ukraine SummitLet’s see if this one sticks?Die Zeit: Dirty Tricks against TymoshenkoSelective EvidenceFirst persona non grata over politically motivated trials in Ukraine?President recognizes Kuzmin’s “personal contribution”US urges release of Tymoshenko and LutsenkoLutsenko’s appeal rejectedLutsenko appeal ruling likely on ThursdayEuropean Court of Human Rights upholds ruling against Ukraine in Lutsenko caseLutsenko demands medical examination outside prisonLutsenko loses civil suit against prison administrationBan on Lutsenko’s correspondence a flagrant violation of the lawLutsenko’s life could be in danger in prison colonyU.S. Government Statement Regarding the Verdict in the Yuriy Lutsenko TrialLutsenko sentenced to another 2 years restriction of libertyStill no aggrieved party, but prosecution demands 2.5 years for LutsenkoThe Criminal Prosecution of Lutsenko and Investigative OperationsLutsenko trial: hearing postponed due to lack of officially aggrieved party
• Topics / Politics and human rights 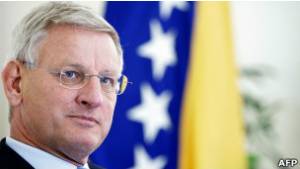 In an interview given to the Deutsche Welle Ukrainian Service, Sweden’s Foreign Minister Carl Bildt gave a strong assessment of the situation in Ukraine, including with respect to the new charges against Yulia Tymoshenko.

How do you view the latest allegations from the Prosecutor General against Yulia Tymoshenko, accusing her of murder?

Carl Bildt:  I think this confirms previous bitter experience. They’re laying one charge after another. The charges in the first trial were clearly tendentious without sufficient grounds.. In my opinion all this is politically motivated. We’ll see what happens later.

How should the European Union treat Ukraine in such a situation?

There should firstly be a firm response, so that our position is clear and understandable which is what we are doing. Secondly, we should find a common language. These negotiations are underway. For example, European Commissioner Štefan Füle will shortly be travelling to Ukraine. The new Ukrainian Foreign Minister will be in Brussels in the next few days. The European Parliament’s Special Commission – Kwaśniewski and Cox will also very shortly be going there. The question is whether we will succeed in changing the position of the Ukrainian leadership. Up till now that has not been overly successful.

What about the Association Agreement? President Yanukovych says that he wants it to be signed. Do you believe him?

Of course I believe that he wants it to be signed. However is he prepared to act in accordance with the principles that are needed?  Any number of similar agreements are based on respect for rule of law, otherwise they won’t work. And if you don’t respect rule of law in one area, then one can suspect that there won’t be respect in other spheres as well. This is the link between the fact that we are seeing selective justice and the possibility of real progress with the agreement.

So what chance is there that the agreement will be signed in Vilnius?

I don’t know. In December the EU put forward its conditions. They were made very clear to Kyiv. We now have to wait and see. I would undoubtedly be pleased if there was the possibility of signing the agreement. But I would welcome even more implementation of the requirements put.

Asked if Ukraine is isolated from the EU, he noted that visits had become much less frequent and said that “there is an element of this, yes”.

Some members of the Ukrainian opposition say that the EU should apply sanctions against Ukraine’s President, the Prosecutor General, judges. What do you think?

I’m not sure that that’s a good idea. We have used restricting measures in a number of cases, for example, in the case of Belarus. As far as I’m aware, we haven’t discussed such sanctions thus far against Ukraine.

Why is the attitude to Ukraine different from that to Belarus?

It’s not different. The situation in Ukraine is not satisfactory. However it is considerably better than in Belarus. There were recently elections which were not totally rigged. There was an element of openness in the pre-election debates. There’s nothing like that in Belarus. And in Belarus there are a fair number of political prisoners. The situation in Ukraine is clearly not what it should be, but it is in any case much better than in Belarus.

I must be honest, I’m not convinced that he was calculating that way. Many people say that he is wavering between moving towards the East or the West. However right now I see that he’s moving downwards, since he’s spoiled his relations both with Russia and with the European Union. Is that based on calculation or on mistakes? More likely the latter.

However you get the impression that he’s not frightened of Europe. Supposedly Europe is a toothless tiger.

What he ought to be frightened of is a difficult economic situation in his own country. Ukraine’s economic situation is truly becoming bad. This will have political consequences for his regime. In the long-term perspective the situation in Ukraine could be significantly improved thanks to relations with the EU. Whether he understands that, I don’t know.