Kwaśniewski - Cox Mission: More questions than answersLutsenko calls for Association Agreement to be signedConcern and anger over break in Lutsenko’s hospital treatmentLutsenko moved without warning soon after operationLutsenko not allowed visits from his wife / defender or other lawyersLutsenko prevented from seeing his wife before his operationWho is delaying Lutsenko’s second European Court judgementTwo Year Mockery of the Rule of LawApplication to release Lutsenko on health grounds rejectedCourt hearing or ploy to keep Lutsenko away from the public view?Relatives report that Lutsenko needs intestinal surgeryLutsenko may undergo surgeryAssociation Agreement without release of Tymoshenko & Lutsenko "unlikely"US urges release of Tymoshenko and LutsenkoLutsenko’s appeal rejectedLutsenko appeal ruling likely on ThursdayEuropean Court of Human Rights upholds ruling against Ukraine in Lutsenko caseLutsenko demands medical examination outside prisonLutsenko loses civil suit against prison administrationBan on Lutsenko’s correspondence a flagrant violation of the law
• Activity / Political persecution in modern Ukraine
• Topics / Politics and human rights 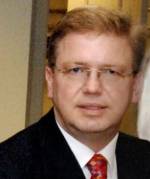 In an interview given to Interfax Ukraine, Štefan Füle, European Commissioner for Enlargement and European Neighbourhood Policy said that there had been no discussion in Brussels of cancelling or postponing the EU-Ukraine Summit scheduled for 25 February. Nor, he said, had the subject been raised of bans against Ukrainian officials.

He was asked about the current mood in the EU regarding the charges of murder against imprisoned former Prime Minister and opposition leader Yulia Tymoshenko and recent removal from a Kyiv clinic of former Interior Minister Yury Lutsenko shortly after serious surgery.  He answered that there had been an understanding that after the parliamentary elections the heads of the European Parliament’s Special Commission – former Polish President Kwaśniewski and former EP President Cox would return to Ukraine not just to continue their work, but to be able to report positive movement regarding issues of politically motivated justice.

"That has not happened. Instead, we have seen during recent weeks an escalation of the situation around Tymoshenko and Lutsenko. I think the mood in member states and in EU institutions reflects exactly this, but it doesn’t mean that we do not want to talk about these issues critically at the summit. I hope very much that the Cox- Kwaśniewski mission will bring some positive elements for the de-escalation of the situation, " he said.