Concern over new charges against prominent opposition figuresTymoshenko case to be raised at EU-Ukraine SummitLet’s see if this one sticks?Die Zeit: Dirty Tricks against TymoshenkoSelective EvidenceFirst persona non grata over politically motivated trials in Ukraine?President recognizes Kuzmin’s “personal contribution”US urges release of Tymoshenko and LutsenkoLutsenko’s appeal rejectedLutsenko appeal ruling likely on ThursdayEuropean Court of Human Rights upholds ruling against Ukraine in Lutsenko caseLutsenko demands medical examination outside prisonLutsenko loses civil suit against prison administrationBan on Lutsenko’s correspondence a flagrant violation of the lawLutsenko’s life could be in danger in prison colonyU.S. Government Statement Regarding the Verdict in the Yuriy Lutsenko TrialLutsenko sentenced to another 2 years restriction of libertyStill no aggrieved party, but prosecution demands 2.5 years for LutsenkoThe Criminal Prosecution of Lutsenko and Investigative OperationsLutsenko trial: hearing postponed due to lack of officially aggrieved party
• Activities / Political persecution in modern Ukraine

Tymoshenko fined for “contempt of court” 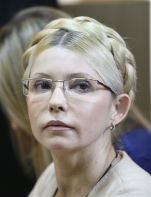 In yet another worrying development, imprisoned former Prime Minister and opposition leader Yulia Tymoshenko has been fined two thousand USD for what Judge Oksana Tsarevych deemed contempt of court.  This was over Ms Tymoshenko’s refusal to appear at the Pechersky District Court in Kyiv for investigative activities linked with the criminal investigation into the murder of MP and businessman Eugene Shcherban in 1996.

Tsarevych also fined MP and Tymoshenko’s defence lawyer, Serhiy Vlasenko the same amount for contempt, over breach of order in court.  Mr Vlasenko was one of 10 MPs in the court room.

The new criminal investigation implicating Tymoshenko in the murder of Shcherban does not harmonize well with the noises made by Ukraine’s leaders about willingness to seek resolution to the problems identified by the EU as standing in the way of signing the EU-Ukraine Association Agreement.  The timing could not be more incredible given the imminence of the EU-Ukraine Summit on 25 February.

Western analysts and politicians have been entirely forthright in their assessment of the new allegations.  As reported, in January this year Ukraine’s Prosecutor General Viktor Pshonka accused Tymoshenko of ordering the killing 16 years ago of Yevhen Shcherban.  He claims he has evidence able to convict Tymoshenko of paying 2.8 million USD to get Shcherban murdered.

The West is understandably less than convinced given the 7-year sentence which Ms Tymoshenko is now serving over a political decision and following an extremely flawed trial.

Unfortunately the Ukrainian public’s perception is begin distorted by highly manipulative television coverage (see: Let’s see if this one sticks? )

Information about the fines from Interfax Ukraine